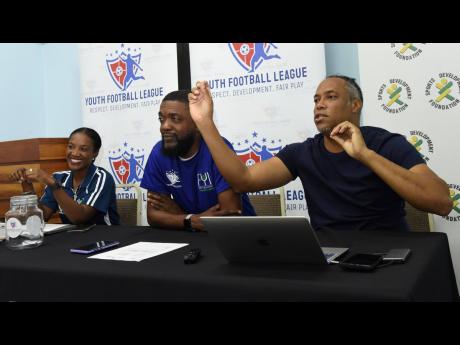 PREPARATIONS AHEAD of the 2022 primary and preparatory school football competition, organised by the Free Your Image (FYI) consultancy group, dubbed Junior Cup, are in high gear ahead of Saturday’s 8:00 a.m. kickoff at the Constant Spring Football Field in Kingston and Cornwall College in Montego Bay.

Paula Pinnock, a member of the organising committee, believes the highly anticipated under-11 tournament, because of the age group of the players, will play its part in raising the level of football at the national level.

“We have a target, and that’s the overall development of our young players. We want to raise the level of competition at the schools, so we didn’t want to see a primary or preparatory school competition, but a merger. We need to have consistent competition at this stage, which will become a greater feeder programme for our high schools,” said Pinnock.

The under-11 competition, which is divided into a rural and urban competition, sees a total of 48 schools being represented. Daniel McLean, head coach of St John the Baptist Primary School, said despite a small hiccup in his preparations, he believes his team should be very competitive.

“I have not prepared as much as I would have wanted, but I know the boys and girls that I have will be great in this tournament. This is the first time I’m coaching this unit, so I trying to make them feel as happy as possible, it’s not all about winning but more development and getting them ready for the next level,” McLean said.

For his compatriot, Curtis McKenzie, who heads the Windward Road Primary under-11 programme, said he will use the competition to fine-tune preparations for the upcoming INSPORTS Primary League.

“Not quite where I wanted to be, but we can always find players who can come, compete and enjoy themselves. I’m also trying to get them ready for the upcoming INSPORTS Primary School League. For me, it’s about them showcasing themselves and enjoying the game,” he said.

According to CEO at Ballaz International Group and adviser to the organising committee, Andre Virtue, the seven vs seven competition is solely aimed at having football being played at the youth level.

“It’s really getting football played at the younger level, because these kids are the future. What we are doing at this age are the fundamentals and basics, ensuring that we’re not skipping steps. This only makes it easier for the transition, the earlier we start, the better it is for development.” said Virtue.