McConnell gets comfortable on ice tracks 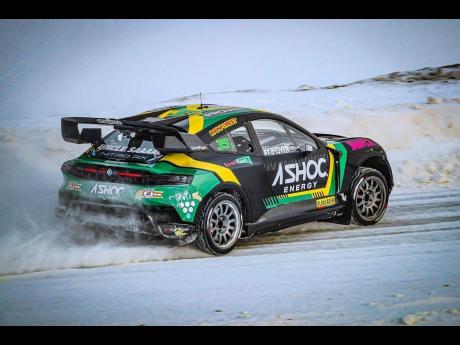 THE NEW year for rallycross driver Fraser McConnell started with him going into the unknown.

McConnell competed in his first ice race, an experience that he called rewarding, saying it yielded good results in his continued pursuit of the Nitro RX Championship.

McConnell did not leave Quebec empty-handed as he secured his second top qualifier award of the season last Friday winning the battle bracket finals over Andreas Bakkerud. It was a result that McConnell said not many would have anticipated but he was glad that in his first career ice race, he managed to turn heads and impress.

“I definitely got to check that off of the bucket list. It was a very eye-opening experience for me and all of the competitors and spectators. No one would have expected the guy from the warmest country to take home the top qualifier so that was a highlight for sure,” McConnell told The Gleaner.

To prepare him for the unknown, McConnell said he sought assistance from his Supercar engineer from Finland, who suggested a former World Rally Championship driver known for his skill on the surface to give him a crash course in racing on ice.

“I had brought in from Finland my supercar engineer and he helped me organise a testing session with an ex-WRC driver, Janne Tuohino. He was known for being very good on snow and ice. I reached out to him. We got a regular Evolution car. Nothing crazy but good enough to get the job done, learning the surface and how the conditions can change,” McConnell said.

“It’s so much more than what meets the eye with what you have to know about racing on the ice. And it was definitely a learning experience and we were better because of it. And we wouldn’t have been able to perform as well as we did if we didn’t do that.”

Especially given the advantages Scandanavian drivers would have had, McConnell said he was pleased at what they were able to achieve in his first race of the year. According to the Jamaican, the experience has gone a long way towards preparing him for the eighth stage of the series in Calgary, next month, which is also an ice race.

McConnell is now in third place with 276 points, 10 points behind second-place Andreas Bakkerud and 68 behind leader Robin Larsson with two stages left in the campaign. McConnell said he is aiming for a top-three finish and to secure a place in next season’s tournament.

“We want to finish the season on a high. We had very consistent results. Disregarding car failures we have been consistently in the top four. It’s been very much a learning year but a proving year. So I am trying to finish up the season strong and try to secure a drive for the following season. Hopefully, we can get our feet into different genres,” McConnell said.