Muslims targeted by violence in wake of IS-claimed attacks 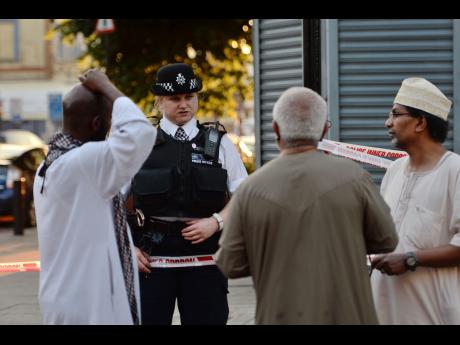 The attack on Muslim worshippers outside a London mosque yesterday follows a rising wave of violence and harassment directed against Muslims across Britain and around the world.

This month alone, a Muslim woman wearing a head scarf told police in Lancashire her car was struck by a bag of vomit. Worshippers at the Omar Faruque mosque in Cambridge found strips of ham attached to their vehicles. Several Muslim families have reported receiving letters warning, "You are no longer welcome in this country." Scores say they have been spat on.

Across Britain, Muslims say they are being targeted by a wave of animosity and violence simply because of the way they dress and worship, and because they share a religion hijacked by bloodthirsty extremists like the Islamic State group, which was quick to claim responsibility for recent attacks in Britain and elsewhere. In yesterday's attack, a man plowed a van into a crowd of worshippers, injuring at least nine people - a tactic used in the recent attacks on Westminster and London bridges.

London's police commissioner, Cressida Dick, said yesterday's assault outside two mosques during the holy month of Ramadan was clearly "an attack on Muslims".

"We are easy targets because of the way we dress and when we pray," said Hassan Ali, a 34-year-old resident of Finsbury Park, a north London neighborhood that is home to a large Muslim population and where the attack occurred. "But every time there is an attack here or elsewhere, we are blamed. When we are attacked, people look away."

Since the wave of IS-inspired terror attacks in Britain, there has been a five-fold increase of hate crimes against Muslims. Tensions have also been running high since Britain's decision to leave the European Union, a vote that was largely driven by anti-immigrant rhetoric - a message that was further reinforced by some of Britain's right-leaning tabloids and spread by populist European politicians promising to stem immigration and tackle terrorism associated with IS.

"I feel unsafe," said Emma Salem, a 15-year-old Muslim who lives in the neighborhood targeted yesterday.