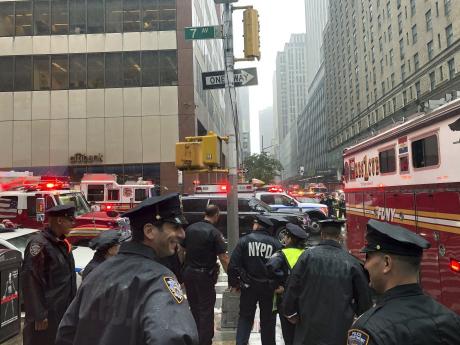 New York police officers monitor the streets near 51st Street and 7th Avenue, Monday, June 10, 2019, in New York, where a helicopter was reported to have crash-landed on top of a building in midtown Manhattan. (AP Photo/Mark Lennihan)

NEW YORK (AP) — The New York City Fire Department says the pilot of a helicopter that crashed on a Manhattan skyscraper rooftop has died.

The Fire Department says the helicopter crash-landed on the top of the tower, which isn’t far from Rockefeller Center and Times Square.

It does not appear anyone else was on board when the crash occurred at around 2:00 p.m.

Governor Andrew Cuomo told reporters that a fire began when the aircraft hit, but it is under control.

Cuomo said it shook the building.

He said there are no reports of injuries of people in the tower.

It was not immediately known what type of helicopter was involved.

Videos posted by onlookers showed emergency vehicles in the street, but no obvious damage to the skyscraper.