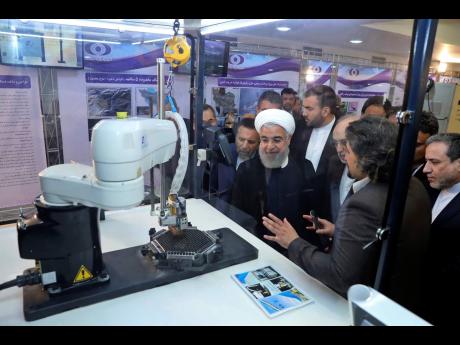 Efforts by world powers to preserve a 2015 landmark nuclear deal with Iran grew more complicated on Monday with confirmation that Tehran had breached the pact’s limitations on stockpiles of low-enriched uranium.

The announcement by Iran, later verified by the United Nations’ nuclear watchdog, that it had followed through with its threat to increase the stockpiles raises the pressure on the countries – Russia, China, Germany, France, and Britain, along with the European Union – trying to preserve the pact following the unilateral withdrawal of the United States last year.

European signatories to the nuclear deal, known as the Joint Comprehensive Plan of Action, or JCPOA, have warned of consequences but have not yet said what they might be.

Meantime, the clock is ticking toward Tehran’s July 7 deadline, when it has threatened to begin enriching uranium closer to weapons-grade levels unless the JCPOA countries offer significant relief from American sanctions.

JCPOA member Russia downplayed the significance of Monday’s announcement that the stockpile limit had been exceeded, calling on the Europeans in the JCPOA not to over-react and on Iran not to push further.

“Exceeding the 300-kilogram limit causes regret but shouldn’t be overdramatised. It must be seen as a natural result of the preceding events,” said Russia’s Deputy Foreign Minister Sergei Ryabkov, adding that Iran had faced ­“unprecedented and unthinkable” pressure from US sanctions.

“We are calling on all European members of the Joint Comprehensive Plan of Action not to heat up the situation,” he said. “We are urging our Iranian colleagues to be extremely ­responsible regarding their actions, ­particularly those that concern Iran’s fulfilment of comprehensive ­guarantees with the IAEA and an additional protocol to the agreement.”

President Donald Trump withdrew the United States from the accord last year and imposed new sanctions on Iran in hopes of ­forcing Tehran into negotiating a wider-ranging deal. Since then, Iran’s economy has been suffering, and the other countries involved have been struggling to keep the pact alive.

At the same time, Europeans have been calling for both the US and Iran to de-escalate the rising tensions in the Middle East.

The US has been worried about international shipping through the Strait of Hormuz since tankers were damaged in May and June in what Washington has blamed on limpet mines from Iran although Tehran denies any involvement. Last week, Iran shot down a US Navy ­surveillance drone, saying it ­violated its territory; Washington said it was in international airspace.

The JCPOA deal promises ­economic incentives in exchange in return for curbs on Iran’s nuclear programme, and while the country had been sticking to the ­limitations so far, its increasing frustration with those nations’ inability to offset American sanctions led to the threats on stockpiles and the increase of enrichment purity.

European countries had been pressing for Iran to comply in full with the accord though they have not specified what the ­consequences would be for ­failing to do so.

“If Europeans do what they have to do, our measures are reversible,” Zarif said, IRNA reported.