Leave the US, Trump tells Democratic congresswomen of colour 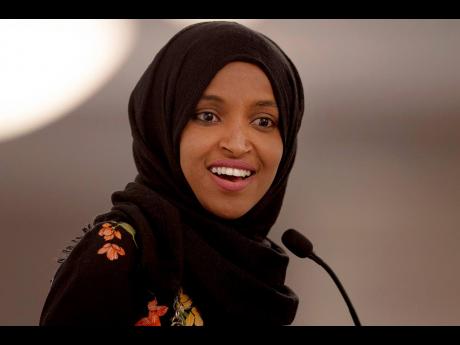 AP
In this May 18, 2019 file photo, Rep Ilhan Omar, District of Minnesota, speaks during the fourth annual Citywide Iftar Dinner in Austin, Texas. In tweets yesterday, President Donald Trump portrayed four female lawmakers as foreign-born troublemakers who should go back to their home countries. In fact, the lawmakers, except one, were born in the US. He didn’t identify the women but was referring to Reps Alexandria Ocasio-Cortez, Ilhan Omar, Ayanna Pressley, and Rashida Tlaib.

President Donald Trump on Sunday assailed a group of Democratic congresswomen of colour as foreign-born troublemakers who should go back to the “broken and crime-infested places from which they came,” ignoring the fact that the women are American citizens and all but one was born in the US. Trump’s tweets prompted a wave of searing condemnation from Democrats, who set aside their rifts to speak as one in calling Trump’s remarks racist and breathtakingly divisive.

Trump was almost certainly referring to Ocasio-Cortez and her allies in what’s become known as ‘the squad.’ The others are Reps Ilhan Omar of Minnesota, Ayanna Pressley of Massachusetts, and Rashida Tlaib of Michigan. Only Omar, from Somalia, is foreign-born.

Ocasio-Cortez swiftly denounced his remarks. “Mr President, the country I come from, and the country we all swear to, is the United States,” she tweeted. “You are angry because you can’t conceive of an America that includes us. You rely on a frightened America for your plunder.” Omar said as if addressing Trump: “You are stoking white nationalism (because) you are angry that people like us are serving in Congress and fighting against your hate-filled agenda.”

With his tweet, Trump again inserted himself into a rift between Pelosi and the liberal congresswomen, after offering an unsolicited defence of the Democratic speaker days earlier. Pelosi has been seeking to minimise Ocasio-Cortez’s influence in recent days, prompting Ocasio-Cortez to accuse Pelosi of trying to marginalise women of colour. “She is not a racist,” Trump said Friday.

“So interesting to see ‘Progressive’ Democrat Congresswomen, who originally came from countries whose governments are a complete and total catastrophe, the worst, most corrupt and inept anywhere in the world (if they even have a functioning government at all), now loudly and viciously telling the people of the United States, the greatest and most powerful Nation on earth, how our government is to be run,” he said in tweets.

“Why don’t they go back and help fix the totally broken and crime-infested places from which they came. Then come back and show us how it is done.”

He added: “These places need your help badly, you can’t leave fast enough. I’m sure that Nancy Pelosi would be very happy to quickly work out free travel arrangements!”

The attacks may have been meant to further the divide within the Democrat caucus, strained over internal debates on liberal policies and on whether to proceed with impeachment proceedings against Trump. Instead, Democrats united in denouncing the comments, which evoked the old racist trope of telling a black person to go back to Africa.