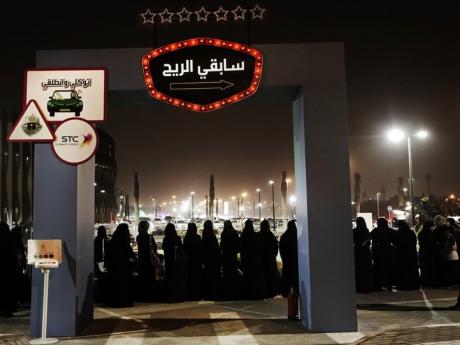 In this June 22, 2018, file photo, women wait in line to ride go-carts at a road safety event for female drivers launched at the Riyadh Park Mall in Riyadh. (AP Photo/Nariman El-Mofty, File)

DUBAI, United Arab Emirates (AP) — Saudi Arabia on Friday published new laws that loosen restrictions on women by allowing all citizens — women and men alike — to apply for a passport and travel freely, ending a long-standing guardianship policy that had controlled women’s freedom of movement.

The new laws, a potential game-changer for Saudi women’s rights, are to go into effect by the end of the month.

The kingdom’s legal system has long been criticised because it treated adult women as minors, requiring they have a man’s consent to obtain a passport or travel abroad.

Often a woman’s male guardian is her father or husband and in some cases a woman’s son.

The changes were widely celebrated by Saudis on Twitter, with many posting memes showing people dashing to the airport with luggage and others hailing the 33-year-old crown prince believed to be the force behind these moves.

But the changes also drew backlash from conservatives, who posted clips of senior Saudi clerics in past years arguing in favour of guardianship laws.

Other changes issued in the decrees allow women to register a marriage, divorce or a child’s birth, and obtain official family documents, which could ease hurdles women faced in obtaining a national identity card and enrolling their children in school.

Women are now also allowed to be legal guardians of their children, a right previously held only by men.

Still in place, however, are rules that require male consent for a woman to leave prison, exit a domestic abuse shelter or marry.

Under the kingdom’s guardianship system, women essentially relied on the “good will” and whims of male relatives to determine the course of their lives.