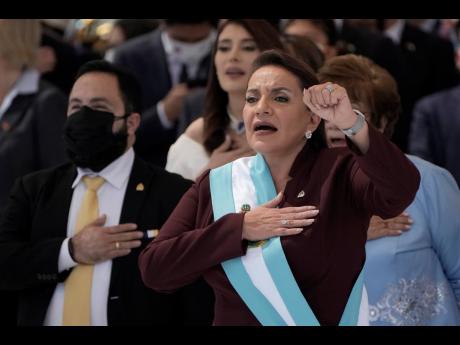 Moises Castillo
Xiomara Castro is sworn in as Honduras’ first female president at the National stadium in Tegucigalpa, Honduras, yesterday.

Hondurans saw Xiomara Castro sworn in as their country’s first female president Thursday amid a sea of waving flags in the national stadium.

Castro blasted the outgoing administration for leaving her a heavily indebted country where poverty and a lack of opportunity have driven hundreds of thousands of Hondurans to migrate in recent years.

“My government will not continue the vortex that has condemned generations of young people to pay the debt taken on behind their backs,” Castro said.

“We have the duty to restore the economic sector on the basis of transparency, efficiency, production, social justice, wealth distribution and national revenue,” she said.

The 62-year-old Castro faces high expectations to turn around the deeply troubled country amid uncertainty about whether an unfolding legislative crisis will allow her the support she needs.

Relatively smooth elections and a healthy margin of victory on November 28 came as a relief, but political manoeuvring in the run-up to Castro’s inauguration has muddled the outlook and distracted from what was to be a hopeful new beginning after the two terms of President Juan Orlando Hernández.

Honduras has been engulfed by a dispute over who will lead the newly elected Congress. Two congressional leadership teams have been selected – neither legitimately, according to experts – and their stand-off threatens legislative paralysis at a time that Castro desperately needs to quickly get to work addressing Honduras’ problems.

Elected lawmakers from Castro’s own Liberty and Refoundation Party backed one of their own to be the new legislative body’s president, rather than support Castro’s choice, which had been agreed with her vice-president to win his party’s support. Neither group backed down leading to surreal simultaneous legislative sessions Tuesday.

Luis Ruiz, a 52-year-old Castro supporter and fruit vendor near the Congress, said the political disagreement threatened to divide the country. “She (Castro) has to resolve this situation through dialogue,” Ruiz said. “She hasn’t taken power and she’s already having problems, she must show her leadership.”

High unemployment, persistent violence, corruption as well as troubled healthcare and educational systems are just some of the pressing challenges awaiting Castro.