Tropical Storm Ian strengthens as it heads to Cuba, Florida 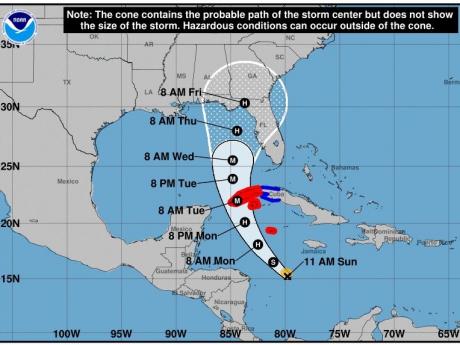 The National Hurricane Center said Ian was expected to strengthen before moving over western Cuba and toward the west coast of Florida and the Florida Panhandle by the middle of the week. - Contributed photo.

TALLAHASSEE, Fla. (AP) — Authorities and residents in Florida were keeping a cautious eye on Tropical Storm Ian as it rumbled through the Caribbean on Sunday, expected to continue gaining strength and become a major hurricane in the coming days on a forecast track toward the state.

Governor Ron DeSantis has declared a state of emergency throughout Florida and urged residents to ready for a storm that could lash large swaths of the state with heavy rains, high winds and rising seas.

“We encourage all Floridians to make their preparations,” DeSantis said in a statement.

President Joe Biden also declared an emergency, authorising the Department of Homeland Security and the Federal Emergency Management Agency, or FEMA, to coordinate disaster relief and provide assistance to protect lives and property.

The president postponed a scheduled September 27 trip to Florida due to the storm.

The National Hurricane Center said Ian was expected to strengthen before moving over western Cuba and toward the west coast of Florida and the Florida Panhandle by the middle of the week.

The agency advised Floridians to have hurricane plans in place and monitor updates of the storm's evolving path.

The centre issued an updated advisory at 5 a.m. Sunday, which noted the tropical storm was forecast to begin “rapidly strengthening later today” with the “risk of significant wind and storm surge impacts increasing for western Cuba.”

Ian was expected to become a hurricane Sunday and a major hurricane as soon as late Monday. The storm had top sustained winds of 50 mph (85 kph) on Sunday morning as it swirled about 345 miles (555 kilometres) southeast of Grand Cayman, in the Cayman Islands.

A hurricane warning remained in effect for the island and hurricane watches were issued for western Cuba.

Cuban state media said emergency authorities have met to plan for the storm's arrival and prepare for evacuations, though none had been ordered as of Sunday.

The track forecast by the National Hurricane Center shows a major storm striking the far-western part of the island early Tuesday, close to the country's most famed tobacco fields.