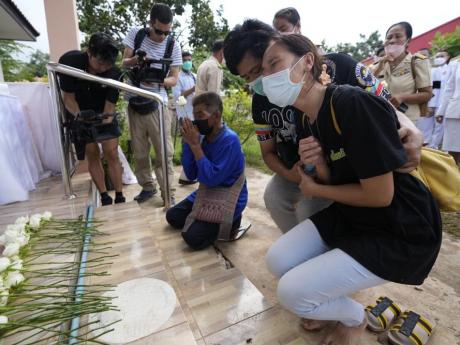 Relatives mourn during a ceremony for those killed in the attack on the Young Children's Development Center in the rural town of Uthai Sawan, north eastern Thailand, Friday, October 7, 2022. A former policeman facing a drug charge burst into a daycare center in northeastern Thailand on Thursday, killing dozens of preschoolers and teachers before shooting more people as he fled in the deadliest rampage in the nation's history. (AP Photo/Sakchai Lalit)

UTHAI SAWAN, Thailand (AP) — Relatives wailed and collapsed in grief before the small coffins of children Friday after a fired police officer stormed a rural Thai daycare centre at naptime and massacred dozens of people.

Thailand's deadliest mass killing left virtually no one untouched in this small community nestled among rice paddies in one of the nation's poorest regions.

Grief also gripped the rest of the country, where flags were lowered to half-staff and schoolchildren said prayers to honour the dead.

At least 24 of the 36 people killed in Thursday's grisly gun and knife attack were children, mostly preschoolers.

“I cried until I had no more tears coming out of my eyes. They are running through my heart,” said Seksan Sriraj, 28, whose pregnant wife worked at the Young Children's Development Center in Uthai Sawan. She was due to give birth this month.

A stream of people, including Prime Minister Prayuth Chan-ocha, other government representatives and relatives, left flowers Friday at the daycare center.

By afternoon, bouquets of white roses and carnations lined the wall outside, along with five tiny juice boxes, bags of corn chips and a stuffed animal.

Later, relatives received the bodies at the local Buddhist temple. As the small, white coffins were opened, some screamed, while others fainted and were revived with smelling salts. For a time, the grounds outside the temple were crowded with people overcome by grief.