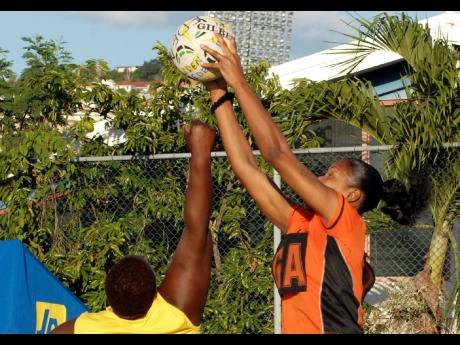 After two surgeries, Sunshine Girl Kasey Evering is finally nearing full recovery from a knee-shattering injury suffered almost a year ago, and is now expected to resume full training by the middle of May.

The six-foot netballer is also eyeing a return to the national programme ahead of important assignments later this year.

The towering defender's progress has been monitored closely by physiotherapist Maureen Spence-Campbell and she has been working in the gym for over two weeks in an effort to strengthen her left knee, following the meniscus and ACL damage which was suffered in early 2009.

The Tivoli Gardens player did her initial operation on the knee in June 2009, but had to return under the knife a few months later in early December after still experiencing difficulties when walking.

"I'm recovering well and having fun at the same time. I'm doing a lot of work in the gym, getting stronger day by day and at this point, I'm hoping that I can start training again by next month," Evering noted.

"The knee is basically back to 100 per cent now, I just need to get some strengthening done because it's still a little weak. That's why I'm hitting the gym so that I can recover the strength before I start training."

Evering last represented Jamaica at the 2007 World Netball Championships in New Zealand, but is determined to return to her much-vaunted levels of performance and is hoping to do enough to convince the national selectors in time for the Sunshine Girls' tours of Australia and New Zealand in the summer, and the Commonwealth Games in October.

Said Evering: "I hope I can work my way back to the level that I was and even better. I am working hard to recover my fitness and ultimately I would like to work my way back into the national programme.

"I am also looking forward to playing for my club again, I really want to get back in shape for the Super League, that is really the aim right now and then I'll take it from there," Evering added, while pointing out that she has already committed to putting in a lot of extra training to improve her fitness level.

It has, however, been a rough and tumbling ride for the 27-year-old, who has had to endure the physical and psychological stress attached to recovering from a career-threatening injury.

"The rehabilitation was very challenging, both mentally and physically," Evering noted. "Thankfully, I had my family and friends supporting and encouraging me all the way and that certainly did a lot to keep me going throughout the whole situation."