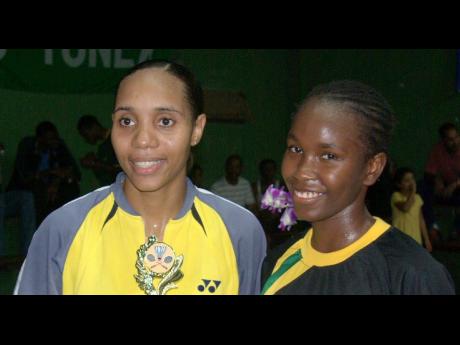 Speaking on their return from the event, which is a qualifier for the men's Thomas Cup and women's Uber Cup - the world's premier badminton championship outside of the Olympic Games - Saunders said she was impressed with the level of performance of other members of the women's team.

"It's good to see badminton coming back. We haven't had a senior team competing for at least two years and we just started training in December, and to see the way we performed, the way we, did shows that we have a lot of talent here," said Saunders, who is Jamaica's first and only badminton Olympian.

The women's team, after defeating Colombia and Puerto Rico 5-0, respectively, in their opening encounters, lost to Canada 5-0 in their third match, before going down 3-2 to Mexico in the fourth and deciding game. If they had beaten Mexico the Jamaicans would have earned a semi-final berth.

Palmer, in the meantime, who along with Charles Pyne, Gareth Henry, Dennis Coke and Anthony McNee formed the men's team, said the experience was valuable, and with the teams' coach, Dr Kingsley Ford, having spotted their faults, they are all looking forward to July's Central America and Caribbean (CAC) Games in Puerto Rico.

"The competition at all levels in both competitions was high with the US, Canada and Peru having very strong teams," he said.

"But we turned a lot of heads. They knew that we always played with a fight, but this time they were most surprised as we played them extra hard. They didn't expect so much from us with the US players and coach coming after the match and congratulating us.

"We have the CAC Games coming up next month and now it's back to the drawing board as we see that we are now up there with the big guys and would love to medal," he added.

The men's team, after losing to the USA 3-2 and Guatemala 4-1 in their opening games, rallied to defeat Colombia and Puerto Rico 5-0 in their remaining matches.

In addition to the CAC Games, Jamaica is set to compete at the Commonwealth and Pan Am Games later this year.