AHWHOFAH - one in a million 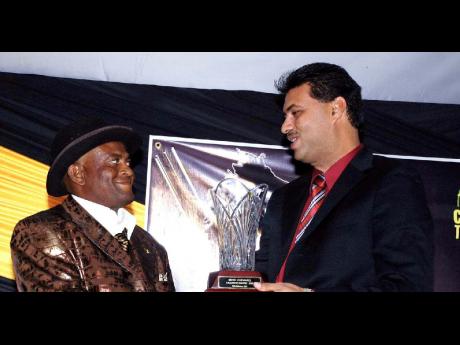 Keith Cornwall (left), who looks after the 'Horse of the Year' AHWHOFAH, receives the champion groom award from CTL director Ian Parsard at the 'None Such/Horse of the Year' awards dinner held at the Terra Nova All Suite Hotel in St Andrew recently. - Colin Hamilton/Freelance Photographer 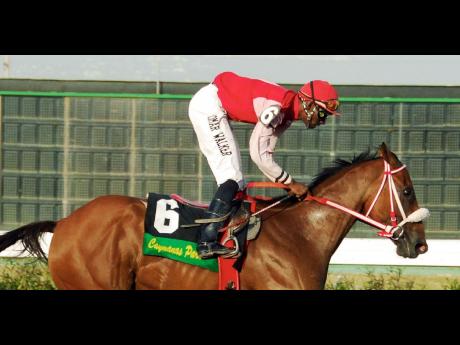 The recently crowned 'Horse of the Year', AHWHOFAH, might be a terror on the racetrack, but at home she's a real lady.

As a four-year-old in 2009, AHWHOFAH won five grade-one trophy races to emerge the top horse with $4.6 million in stakes.

But according to her trainer, Wayne DaCosta and groom, Keith Cornwall - both champions of their respective categories last year - AHWHOFAH is something special.

"Off the track she acts like a human being," said Cornwall, speaking to The Gleaner in front of her stall and gently stroking her face during the conversation.

"Whenever she hears my voice, she knows I'm around and starts to nicker. But if she dosen't know you she becomes suspicious by flicking back her ears on top of her head," added the veteran groom who is popularly called 'Broad Back'.

"She is very sensitive but at the same time so calm and relaxed," he revealed. "All in all, I would describe her as a lovely filly... a pleasure to work with because of her cool temperament.

"She eats very well.... loves grass, hay and sweet feeds such as pellets, corn, oats and molasses," he explained.

Continuing, Cornwall recalls that he has been looking after AHWHOFAH since she was a yearling in 2006.

"She came in so tiny... like a goat kid, that I couldn't imagine she would have grown to this height.

"Although considered small when she started to race, she really developed from two to three and is now built like a racehorse because of her near perfect conformation.

"Look at her hind quarters... you see how she looks around there, like a champion horse," the proud groom pointed out.

He said AHWHOFAH becomes animated whenever she sees her regular pilot, champion jockey Omar Walker who has ridden her to victory on eight occasions, mostly under big weights.

"She responds to Walker so well that he can work her with one hand at exercise. You have to be gentle with her and the champion jockey has the velvet touch," he said.

AHWHOFAH's owner/breeder Winston Kong and trainer DaCosta both agreed that the illustrious campaigner is one-in-a-million.

"AHWHOFAH has made us very proud," said Kong, who owns her dam (mother), Executive Profile, who was a useful campaigner when trained by DaCosta in the late '90s.

"I would say she is the best sprinter filly I have trained. What's more, she has never been lame in her life.... she's never had reason to see the vet and that's why she is so outstanding," added the nine-time champion trainer.

In addition to the 'Horse of the Year' award, AHWHOFAH was voted champion sprinter for a second straight year, champion middle distance performer, not to mention champion local-bred horse and champion four-year-old and up.