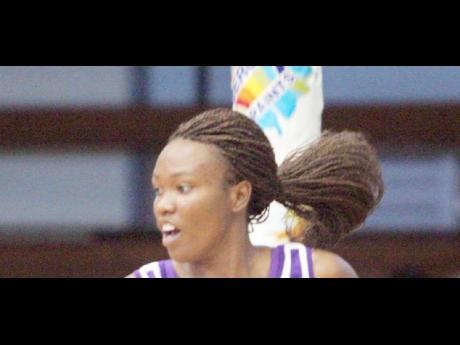 Carla Williams-Borrego got supreme service from her attackers in the final quarter and the Adelaide Thunderbirds benefitted from a momentum swing, which they rode to a 53-36 victory over the Southern Steel in the ANZ Championship on Sunday.

Jamaican goal shooter Williams-Borrego scored 37 goals from 45 attempts, as the Thunderbirds were bullish in the final period and romped to their second straight victory in their fourth round match at ETSA Park.

The contest teetered on a knife's edge throughout the first 45 minutes, where both teams were in with a strong chance, but the T-birds exploded to life with a withering final 15 minutes, after they carried a 34-31 lead into the break.

The T-birds applied further pressure through their defensive pair of Geva Mentor and Mo'onia Gerrard, which the Steel failed to handle as they missed several crucial shots.

This boost had a positive effect at the other end of the court, where Williams-Borrego and Kate Beveridge found their range to fire the home team to the victory.

Williams-Borrego and Beveridge had lacked accuracy early on, but they gradually found their step and the T-birds overcame an impressive start from the visitors to lead narrowly, 12-11, after the first quarter.

In the second period, the T-birds started to pull things together, with Mentor and Gerrard upsetting the Steel's rhythm enough to create some opportunities for Williams-Borrego and Beveridge at the other end of the court, to hang onto a 24-23 lead at half-time.

Both teams changed their wing defences for the second half, but possession changed hands regularly, as both teams were pressured into errors. But the T-birds battled their way to a three-goal buffer at the end of the quarter, which was decisive in the context of the close encounter.