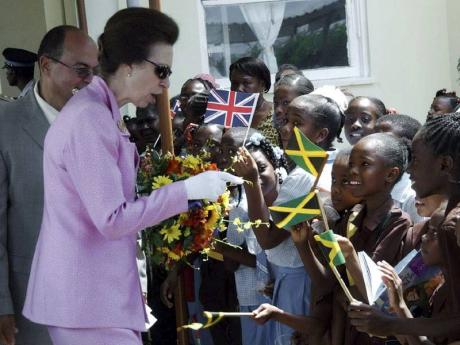 Her Royal Highness Princess Anne, daughter of Queen Elizabeth II, will be making an official visit to Jamaica from June 5 to 6.

The Princess last visited Jamaica in 2005.

Born on August 15, 1950, Princess Anne is well known for her charitable work.

During her three-day trip in 2005 she visited parts of Spanish Town, St Catherine, Kingston, and journeyed to St Thomas for the 50th anniversary rededication and celebrations of the Princess Margaret Hospital.

Arriving at the institution in a Jamaica Defence Force helicopter, Princess Anne was greeted by a host of hospital administrators and staff, politicians, dignitaries and health officials including then Health Minister John Junor.

She toured the children's and female wards.

On November 14, 1973, Princess Anne married Mark Phillips, a lieutenant and later captain in the Queen's Dragoon Guards at Westminster Abbey, London. The marriage was televised around the world, with an estimated audience of 100 million. The couple has two children: Peter Phillips (born (November 15, 1977) Zara Phillips (May 15, 1981). Princess Anne and Mark Phillips divorced in 1992.

On December 12, 1992, Princess Anne remarried, the first royal divorcee since Henry VIII of England to do so. She chose to remarry in the Church of Scotland since the Church of England forbade divorcees from remarrying in their churches, a stance that is now softening.

She married Timothy Laurence in Crathie Church on the Balmoral Estate, Aberdeenshire.