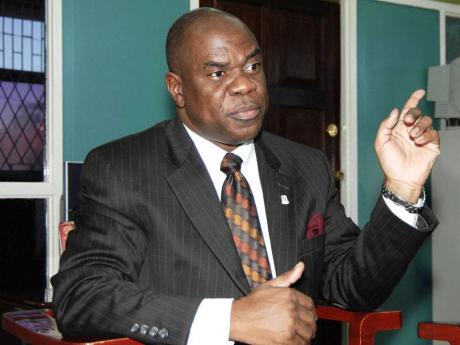 It was a bittersweet taste with the requisite drama that ended the fifth INC-sponsored John Powell Memorial tournament at the Chrystar Villas Hotel on Sunday. Overshadowing the winner of the event was an announcement by Ian Wilkinson, president of the Jamaica Chess Federation, that moves to control early draws in tournaments will soon be implemented.

Winning the Open section on tie-break was national champion NM Damion Davy. He and Stuart James were locked on 4.5 points at the end of the tournament. Davy and James are both students at the University of the West Indies.

But it turned out to be a near anticlimactic result after a near stampede when more than one dozen ceramic tiles on the third floor of the Chrystar Villas housing the tournament, spontaneously popped up and cracked mysteriously, unsettling the room of the just under 100 players. This all happened a few minutes into the start of the final round.

Then just a few minutes post the tile-popping restart of the tournament, yet another unexpected event happened as play on board one between NM Davy and young star Shreyas Smith of Calabar High came to an effortless end after six moves. NM Davy, needing only half a point to secure the top place in the tournament, offered Smith a draw on the sixth move of the game which was accepted. The draw ensured that Smith could not win the tournament. His only possible gain would be rating points from the draw against the higher-rated Davy.

It was this draw that sparked Mr Wilkinson's ire.

Speaking to the Intermediate players and juniors in their prize presentation before the Open section ended, Wilkinson announced that he would "penalise the Open section for the early board-one draw by withholding a bonus $20,000 payout for the tournament." He added: "Rules are going to be put in place to stop this practice." The early draw, he noted, was upsetting to the tournament as it distorted the competitiveness of the final round.

Stuart James had an outstanding tournament beating three National Masters - NM Equittable Brown, NM Brandon Wilson and NM Andrew Mellace who all succumbed to the young university student who is clearly in form.

Tomorrow, the National Age Group Championship kicks off the first of two weekends at the St Hugh's Preparatory School in Kingston.

Sponsored by Grace Tropical Rhythms, the winner of the age-group sections ranging from Under 8, 12, 14, 16 and 18 will be Jamaica's national representatives for international tournaments for 2012.

Nicholas Bramwell, brand manager for Grace Tropical Rhythms who has put his brand behind chess for the second year in a row, said: "Supporting chess reflects our passion to help the youth develop, and what better way than to encourage a sport that insists on concentration, focusing and planning among children?"

The tournament should have been held last November, but was postponed. Tournament organiser NM Warren Elliot, from Chess Unlimited, said this year they expect a turnout close to 300, which is approximately the number of players that participated last year. NM Elliot and NM Jomo Pitterson are the principals in Chess Unlimited.

The quarter-final pairings for the high school tournament are finally out.

This week we continue going through the symbols used in game notation. When indicating the act of capturing a piece, the symbol x is used.

February 4-5: Quarter-finals of the high school tournaments should be completed. Venues to be decided.

No ChessMate Analysis this week because of the number of reports. Analysis continues next week.