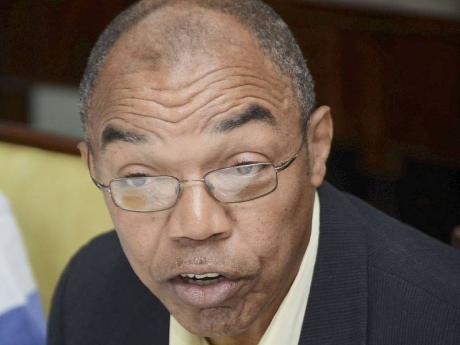 The Jamaica Athletics Administrative Association (JAAA) is warning athletes that they will not be allowed to hold the nation hostage at the Olympic Games.

This comes against the background of controversial occurrences involving athletes at past Olympic Games, including their no-show at its pre-Olympic camp. There was also an even more embarrassing situation in 2000 at the Sydney Olympics, when several athletes organised a demonstration.

When asked the question during a special Gleaner Editors' Forum - held at the company's North Street head office on April 13 to mark the 100-day countdown to the London Olympics - JAAA President Dr Warren Blake said the nation's athletes will have to adhere to all rules and regulations, including reporting for its mandatory pre-Olympic training camp, or face the consequences.

The question also focused on the fact that the association of athletes through clubs, namely MVP and Racers, could influence action that might infringe on its policies.

However, Blake warned: "We are not going to be held hostage, and so far both the major camps have been very cooperative.

"I think all athletes, coaches and managers know that the pre-meet training camp is mandatory, and also when they sign a form to take part in the national championships, they will sign that they agree to abide by the rules and attend the camps," he added.

The issue of pre-meet camps came under the radar ahead of the 2008 Beijing Olympic Games and the 2009 World Championships in Berlin when several members of the MVP Track and Field Club did not show up for the camps.

The Stephen Francis-led MVP disputed the JAAA's claims that the pre-event camps were mandatory and, instead, some members remained at their annual summer base in Italy before joining the rest of the Jamaican team in China and Germany, respectively.

Following the dispute in 2008, the athletes who did not show up for the World Champs preparation camp in Nuremberg, Germany, in 2009, which included Shelly-Ann Fraser-Pryce, Asafa Powell, Melaine Walker, Shericka Williams, Brigitte Foster-Hylton and Kaliese Spencer, were subsequently barred from the Jamaica camp.

They were only readmitted following a request to the Jamaica team hierarchy from International Association of Athletics Federations (IAAF) President Lamine Diack.

When the team returned to Jamaica, a JAAA disciplinary panel, headed by Chief Justice Lesley Wolfe, in November 2009 ruled that no action should be taken against the six athletes who did not turn up for the camp.

"When the disciplinary committee met back in Jamaica, no further action was taken, because the panel that we had set up ruled against the association in that you could not try somebody for the same problem twice," Blake explained.

"And we had already enforced the rules in the fact that we withdrew them and it was only on the intervention of the international association that they were allowed back in," he added.

Blake, however, conceded that the issues surrounding the camps did cause a problem, but does not foresee such problems resurfacing as he thinks there is now greater understanding and a more cooperative approach.

"It is noticeable that since then, there has been no recurrence of such, so people realised that we meant what we said," he added.

The JAAA's current position in insisting that it will not be held hostage can be understood, as it is not only regarding pre-event camps that its authority has been questioned.

In 2000, sprint icon Merlene Ottey placed fourth at the National Senior Trials, which is used to select the members of the Olympics team. According to the rules of the JAAA, only athletes who finish in the top three at the trials are eligible to run at the Olympics; hence, she only qualified to run on the 4x100m relay team.

Ottey, who was fighting a drug issue relating to nandrolone that had affected her preparation leading into the National Championships, asked that she be substituted for another member for a 100-metre spot.

The JAAA's decision to replace Peta-Gaye Dowdie, who was thought to have sustained an injury after the trials, caused widespread controversy.

The JAAA had replaced Dowdie following her refusal to do a trial run at its training camp.

Some of the other athletes believed Ottey was usurping a younger and equally worthy athlete.

The protest ended only when the International Olympic Committee threatened to throw the Jamaicans out of the Games if the team managers were not able to control their charges.

Ottey placed fourth in the 100 metres final, but was later upraded to bronze.