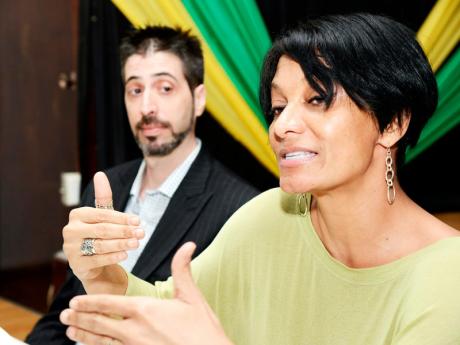 Blaine Dowdle, CEO of MedCannAccess, Canada, looks on as Wanda James, member of Cannabis Global Initiative out of Colorado, addresses the public session of the Cannabis Stakeholders Forum at the PCJ Auditorium, in New Kingston on Sunday. Colorado is one of two US states to have recently legalised the recreational use of marijuana. - Rudolph Brown/Photographer

Canada is willing to purchase marijuana from Jamaica, a lucrative deal that could potentially earn billions of dollars for the country on an annual basis.

Blaine Dowdle, chief executive officer of Canada-based MedCannAccess, is urging Jamaica to act quickly and seize the vast economic opportunity that could come from legalising marijuana and establishing an export market for the product.

According to Dowdle, his country is looking to engage in the potential CDN$1.2-billion medical marijuana market. However, it is very expensive to grow marijuana in Canada, and hence investors there would be more than willing to import it from Jamaica.

Noting that medical marijuana currently retails for approximately CDN$7-$10 per gram in Canada, he said the product was in demand, which makes it a very profitable market.

Dowdle, who was in Jamaica to participate in Sunday's Cannabis Stakeholders Forum that was staged at the PCJ Auditorium in St Andrew, said MedCannAccess is a leader in the medical cannabis field, working to improve access for patients across Canada.

"I'm here from Canada representing 50,000 sick patients right now who don't have access to safe, reliable, inexpensive medicine. Lots of the people using medical marijuana in Canada are disabled, they are literally sick and don't have a lot of money, and they do need lower-cost cannabis in Canada," he told The Gleaner.

He noted that in Canada, the number of patients under the medical marijuana programme has been doubling in size annually.

"We are expecting it to continue along that trend. That means within the next four to five years, we should be able to supply between 400,000 to 500,000 patients," Dowdle said.

He noted that MedCannAccess is currently becoming a licensed producer in Canada, which would enable it to produce and distribute medical marijuana within the Canadian market.

"There is an import provision within our new regulations which we are becoming licensed under. Hence, we would be able to import marijuana to Canada from any country in the world that has a medical marijuana product that is ready for export. Our regulations are already in effect and we have passed everything except the security check, which we are expecting any day now," Dowdle said.

He noted that, "There are currently about four companies in Canada that are currently licensed to import marijuana for medicinal purposes."

He said these companies currently import marijuana from a company in Holland; however, it would be cheaper coming from Jamaica, because of the cost for the growth of the plant in Holland.

He also stated that the industry was not restricted to Canada alone, as the Dutch company also exported marijuana to Germany and Italy, among other European countries.

He said that in Canada, growing marijuana was phenomenally expensive. They have to do it indoors, use lights, nutrients and very expensive ventilation systems he said, describing it as a complicated system.

He added, "Jamaica has probably the best environment in the world. With the help of small farmers you would be able to set up smaller-scale and lower-cost production spaces that would ideally fill a need in the Canadian market."

"I hear everyone talking about Uruguay bypassing Jamaica and becoming the first Southern Hemisphere country to get into the Canadian medical marijuana market. However, Jamaica still has that opportunity."

Uruguay legalised the use and sale of marijuana last December.

"If the weather is there, the determination is there and the people want it, then it's yours for the taking, as there is a great need in Canada for lower-cost medical marijuana of higher quality," Dowdle added.