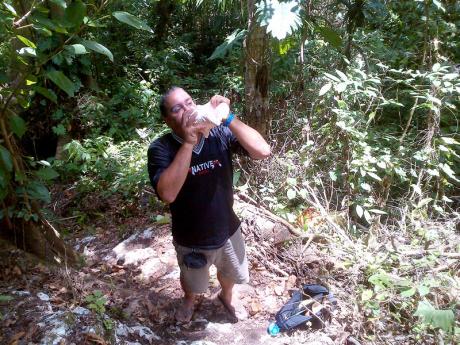 Taino chief Roberto Mukaro Borrero, a Boriken Taino from Puerto Rico and president of the United Confederation of Taino People, blows a conch shell while standing on steps that could have been etched into the limestone rock by Tainos in Woodside, St Mary, last year. He will be a presenter at the Charles Town International Maroon Conference on Monday, June 23.-FILE

Over the four days, there will be papers presented on 'Maroons and Indigenous Jamaica' and 'Maroons, Indigenous Peoples, and Indigeneity'. And in keeping with the theme of 'indigeneity', there will be delegations from the Saamaca Nation of Maroons, Suriname; the Australian Aboriginal People; and the United Confederation of Taino People.

In addition to the lectures on Friday, there will be a hike to the 18th-century Orange Vale Coffee Plantation.

On Saturday, there will be poetry reading and dance performances. Also, Phillip Supersad and the Akwaaba Drummers are expected to give an explosion of hypnotic sounds, while the Charles Town Drummers and Dancers, team up with dancers from Edna Manley College of the Visual and Performing Arts to present Dance Afana (the machete dance).

On the same day, the conference will be officially addressed by Dianne McIntosh, director general, Executive Branch, Ministry of Finance.

Sunday the 22nd is the big day as it will see the annual Quao Victory Day celebration. Quao was the hero of the Windward Maroons who outwitted the British. The celebrations commence with the procession of the colonels from the Gaa'man's Hut into the Asafu Yard. The colonels, as well as the Gaa'man from the Saramaka Nation of Suriname, will address the gathering, likewise Dr Vicki Grieves of the University of Sydney, and other Aborigines from Australia.

Other speakers on Sunday will be Minister of Justice Senator Mark Golding and principal of The University of the West Indies, Mona campus, Professor Archibald McDonald. Sunday's highlight will be the installation of Jamaica's Gloria 'Mama G' Simms as the first female Gaa'man of the Saramaka Maroons of Suriname by Gaa'man Belfon Aboikoini.

The Gaa'man is the 'chief above chief' among the Saramaka Maroons. The day will wind down with the mello sounds of International Music Maestro Winston 'Merritone' Blake, featuring the music of Duke Reid and Sir Coxsone Dodd.

The final day, billed Taino Day, will see discussions on The Taino agenda: near death and resurrection of the Taino People; Taino revival; and exploring the goodness of 'The Good Ones'. The Tainos were the known indigenous people of Jamaica. They were annihilated in the island by Columbian diseases and brutal slavery. They survived in other islands, however.