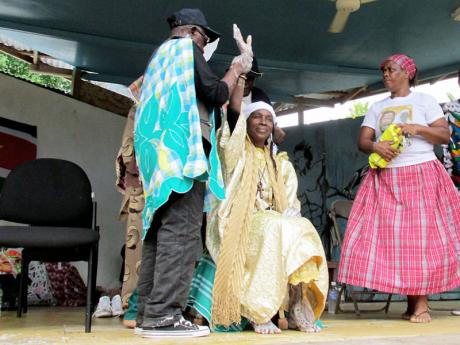 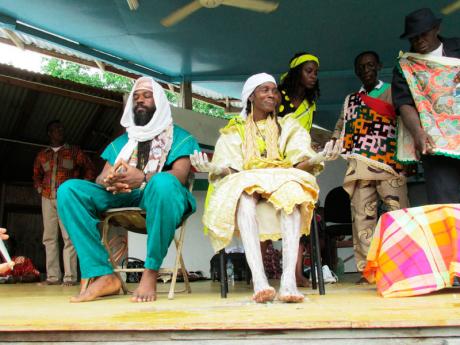 Gaamang Gloria 'Mama G' Simms with painted feet and hands symbolising transparency and healing. Beside her is her gaamang husband.-PHOTOS BY PAUL WILLIAMS 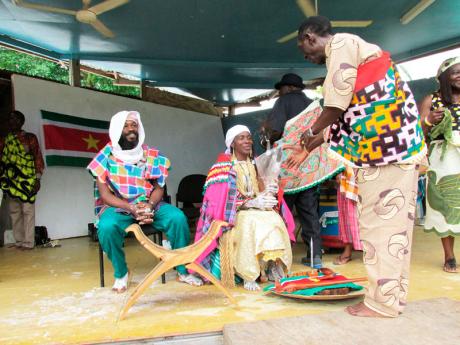 Head of chiefs of the Okanisi Maroons of Suriname, Tabiteng Baja Gason, presents Gaamang Gloria Simms with a gift after her installation as paramount Maroon chief on Sunday. 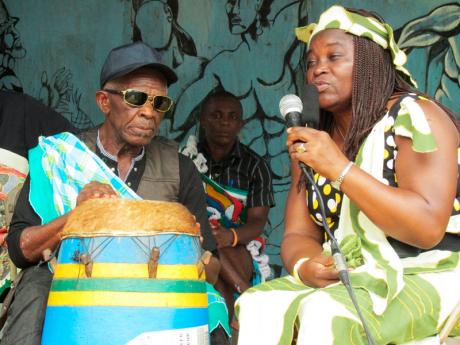 CHARLES TOWN, Portland:IN AN elaborate traditional ritual, never carried out before in Jamaica, Gloria 'Mama G' Simms of the Trelawny Town Maroons and leader of the Maroon Indigenous Women's Circle, was installed as gaamang, paramount chief, by the Okanisi Maroons of Suriname on Sunday.

The process on Sunday was a culmination of that which started in Suriname last year when Simms spent a month as guest of the Maroon Women's Network. Upon a visit to the Saramaka tribe, the gaamang of the tribe saw her as leader of the people and decided to make her gaamang.

But the installation would have to be among Simm's own people. However, the gaamang of Saramaka was unable to travel for the event, so the Surinamese government sent a delegation of seven Okanisi Maroons, including two government officials and the Surinamese ambassador to Trinidad and Tobago, Fidelia Graand-Galon, to install Gloria Simms as gaamang, the highest political position among the Maroons in Suriname.

And to elevate Simms to this esteemed status, they first did a river cleansing in the Buff Bay River, which runs nearby the Asafu Yard. The procession, which included Simm's partner, then made its way to the Asafu Yard.

First onstage was the Okanisi delegates, led by Graand-Galon, who said during her opening remarks, among other things, "We want to thank Jamaica for embracing this."

Graand-Galon was also interpreter for the occasion. It was particularly important for her to tell the audience what the talking drum, the apinti, was saying through drummer, elder, Da Talie Malonti. And as chief of chiefs Tabiteng Baja Gason poured rum onto the stage, he asked for guidance and prayed that everything would go well.

Upon the invitation of Graand-Galon, Simms, who was attired from head to toe in gold, entered the stage to rapturous applause and a standing ovation, with her partner by her side. The Rastafarians were particularly vocal as they were beside themselves with joy. Simms is also a Rastafarian.

After they were seated in a regular chair, the apinti began to talk. In essence, it sent praises to the ancestors and Mother Earth. After some more libation and a brief traditional dance by Basja Carlo Kerie, Gaamang Johannes Ballong, paramount chief of the Okanisi Maroons, rose to speak.

Gaamang Ballong thanked the Jamaica people for the hospitality shown to his delegation and God for "the rivers that brought us together". He said Simms' installation was not because of "our own power", but God's power, and that she was not gaamang just for Jamaica, but for the whole world.

The brief speech was followed by the removal of Simms' hat, which was replaced by a white cotton head wrap. She was told that she must never be corrupt, but transparent. Her slippers were then removed, and her feet and hands were washed with herb and white clay by Basja Carlo Kerie and elder, Da Talie Malonti, while Gaamang Ballong explained the meaning of the activities.

It was now time to put her on her ceremonial stool, and a Jamaican woman was requested to assist to show unity between Suriname and Jamaica. With elder, Da Talie Malonti holding her right hand and the woman holding the left, Simms rose and sat three times, making her officially Gaamang Gloria Simms.

While elder, Da Talie Malonti and Basja Carlo Kerie raised her hands into the air several times, Gason told her, "Of all people, of all nations, you are gaamang, for all the rivers, you are gaamang ... Everything in the forest, all over, young and old." He then told Gaamang Simms and her gaamang husband, who was also blessed, what it means to be gaamang and gaamang husband, and what was required of them.

The ritual concluded with the giving of gifts from the people of Suriname to Gaamang Simms and her gaamang husband, and some other people. While people queued to congratulate Gaamang Simms, Mynairfa Joekoe brought greetings from Suriname's Ministry of Regional Development and International Affairs. Also in attendance was the secretary to the minister of regional development, Joanne Andraai.

When asked what the elevation to the status of gaamang meant to her, Gaamang Simms told Rural Xpress, "I was surprised because I didn't expect it ... I am very grateful and I feel honoured, but in the long run, the honour goes with responsibility."