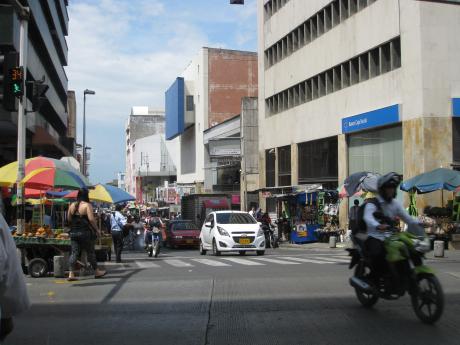 Colombia appears to be one of the few shining stars of Latin America.

Its centre-right government, led by Juan Manuel Santos, has close ties with Washington. Finance Minister Mauricio Cardenas graduated from Berkeley and is well respected in most academic circles.

Cardenas won aplomb from Wall Street and the rating agencies. The country had one of the highest growth rates in Latin America for almost a decade.

However, it is also the most vulnerable economy of the region. Colombia has all of the classic symptoms of Dutch disease. The term was coined during the 1970s, when the exploitation of the Dutch North Sea gas fields began to affect the economy.

The sudden development of the booming commodity product led to the detriment of traditional sectors, such as manufacturing and agriculture. It also led to the reallocation of resources, such as capital and labour. The Dutch guilder appreciated massively, thus reducing the competitiveness of exports.

This is also what happened to Colombia. At the turn of this century, the government introduced a new regulatory regime to provide better royalties and taxation conditions for the oil and mining sectors. The result was a tidal wave of capital that poured in to take advantage of the country's vast mineral bounty.

During the past 20 years, more than US$150 billion flowed into Colombia, with US$65 billion slated for mining and oil.

The large capital inflows forced the Colombian peso to appreciate more than 40 per cent.

The loss of competitiveness depressed the country's agriculture and manufacturing sectors. Their demise was exacerbated by the free trade agreement with the United States - the TLC - which was signed in 2011, as well as the diplomatic spats with Venezuela and Ecuador.

The free trade agreement triggered a tsunami of cheap US agro-industrial and manufactured goods. A walk through a Colombian supermarket is like taking a stroll down the aisles of a Piggly Wiggly supermarket in Memphis, Tennessee. All of the American brands are on display. Even American lemons are on sale, which is a travesty for a tropical country like Colombia.

Given the harsh tax regime, many Colombian producers packed their bags and moved to friendlier countries in order to export back to their home market. Likewise, the political disputes with Venezuela and Ecuador forced the country to surrender two of its most lucrative export markets, where Colombian manufacturers enjoyed a tremendous competitive advantage.

Today, Brazil, Argentina and China have moved in, displacing Colombian exporters for good.

The trade numbers say it all. Mining and oil represent more than 80 per cent of Colombian exports. This is the reason the economy and peso were blindsided by the recent collapse in commodity prices. Colombia's current account deficit is expected to finish the year north of seven per cent of GDP, thus making it the highest in the Western Hemisphere.

Of course, Colombia is not the only natural resource-producing economy in the emerging world.

Chile, for example, is also a major commodity exporter. However, the Chileans implemented an anti-cyclical stabilisation fund that allowed the government to accumulate savings during the boom to help it through the downturn in copper prices.

Colombia never took such precautions. It spent most of the windfall. Indeed, it can be said that it misspent the windfall on corruption, mismanagement and clientalism.

Now, as the country endures the collapse of commodity prices, it needs to introduce pro-cyclical policies, such as the tightening of fiscal and monetary policies, to address the burgeoning imbalances. Colombia is not the only government that misspent the windfall. The region is full of similar cases, such as Venezuela, Ecuador and Mexico. Unfortunately, Colombia is not an oil-producing giant. It is an oil-producing midget.

Unlike its neighbour, which has the second largest reserves in the world, Colombia's oil runs out in less than seven years.

To make matters worse, the resumption of hostilities with the FARC pushed oil exploration activities down by 92 per cent. This makes Colombia one of the weakest economies in Latin America. The fiscal deficit is going to finish the year at about 3.6 per cent of GDP. The only reason it is not worse is because the government is skimming excessive dividends and royalties out of Ecopetrol, while forcing the company to go to the international capital markets to cover its operational needs.

The oil boom has damaged the country's agriculture and manufacturing sectors. Its traditional trade partners are gone. Last of all, it is about to embark on a US$70-billion reconstruction programme to build the 4G highway system and implement the reconciliation/peace process.

Colombia may look good on the outside, but a glimpse under the hood reveals a big mess.