UPDATED: Kaya ganja shop to open for business in March 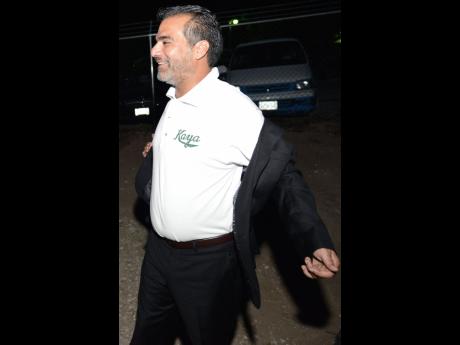 Balram Vaswani plans to open the first of a series of Kaya Inc ganja stores in St Ann by March 10.

The businessman and chairman of Kaya reaped the first legal harvest for sale last week in the presence of the Cannabis Licensing Authority. This harvest will feed the stock of the store or herbhouse.

"We would be ready to open our doors in early March," said Vaswani in a response to Gleaner queries. "We have completed our initial build-out of phase one, which would include the cafÈ and herbhouse."

The costs associated with the development of the cafe, dispensary and farm to date have surpassed $76 million.

Last week, Kaya Farms, in Drax Hall, St Ann, a sister company to Kaya Herbhouse, announced its first harvesting under the close watch of the interim CEO for the CLA, Augustus Staples.

"Furthermore, it is an indication that being patient concerning the challenges of start-up is well worth the while. For such patience, we are indeed grateful," Staples said in the release.

The cannabis authority has received hundreds of applications since May 2016 but has formally issued three licences. The CLA refrains from disclosing the names of applicants, and to date has made no formal announcement of Kaya's licence.

"We were issued our Tier 2 Cultivation licence last year under Kaya Farms and our Kaya Herbhouse licence was received this year," said Vaswani, adding that he was finalising build-out of Kaya Extracts for processing and his second retail herbhouse, which is expected to open in April.

Kaya will provide medicinal ganja to locals and tourists. Since last year, Kaya Inc has been recruiting staff for its ganja wellness centre and cafe.

"Combined, we currently employ a total of 17 personnel and an additional 12 will be added by end of February," the Kaya chairman said.

His medium- to long-term plans include setting up as many as eight herbhouses across Jamaica.

"Each retail location would be a little different from our flagship in Greenwich Estate, St Ann, that would have a herbhouse, cafe, spa, kitchen, clinic, tours and outdoor area for live events that will be pretty unique right off the highway," Vaswani told the Financial Gleaner.

"Our other seven retail locations might not have the option to have a cafe or spa included based on its location, so we have created a business model that could adapt itself to the area, but still create an uplifting environment for the consumer," he said.

Vaswani also disclosed that his company has been offered several opportunities to partner with a variety of licensed holders in Canada, Australia, Israel, Hawaii and India, jurisdictions in which marijuana has been either legalised or decriminalised.

In 2015, Vaswani set up Ganja Labs LLC, which grew legal marijuana at the University of Technology Jamaica in Kingston, under the UTech Medical Marijuana research licence granted by Minister of Science, Energy and Technology Dr Andrew Wheatley in May 2016.

Ganja Labs spent US$500,000 ($64 million) to build out that operation, under which it launched cultivation of marijuana using three methods: indoors in temperature-controlled rooms; outdoors in smart pots exposed; and in a greenhouse, grown in an enclosed shed with natural light.

(EDITOR'S NOTE: In a previous version of this article, it was incorrectly reported that Kaya will provide medicinal and recreational ganja to locals and tourists. The company will only provide medicinal ganja. We apologise for the error.)