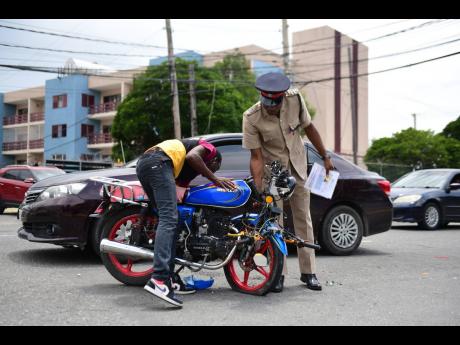 File
Jamaica’s problem has also been exacerbated in recent years by an explosion of motorcycles, whose drivers and passengers now account for around a third of the island's traffic deaths. Mostly, motorcycle riders don’t wear helmets.

It is not clear if Peter Bunting’s characterisation of the constabulary’s Public Safety and Traffic Enforcement Branch (PSTEB) as an “abject failure” is a fair assessment of the formation. Nonetheless, it seems obvious that, after nearly four years of operation, the PSTEB is due for a serious review to determine if it is delivering on its declared mandate. We suspect most people will say no.

But it’s not only the PSTEB that is due for such an analysis. Given the backdrop against which Mr Bunting made his assertion – a spiral in traffic crashes – a good, hard look ought to be taken, too, at the National Road Safety Council (NRSC), to see if, after more than three decades, it is fit for purpose. Indeed, we expect that the NRSC’s long-standing deputy chairman, and the face of the commission, Dr Lucien Jones, would welcome such a review, especially if it meant that he was no longer a lone warrior for road safety.

When the PSTEB was launched in 2018, out of the merger of several existing police units, including the traffic, highway and motorised divisions, it was heralded as the entity that would bring order to Jamaica’s chaotic public spaces, inclusive of its aberrant motorists. The unit’s members, on their lime green motorcycles and luminescent vests, would be ubiquitous in the cities and towns.

“The new branch should benefit the public through increased police presence and improved effectiveness in public spaces and thoroughfares; reduce incidences of traffic collisions, injuries, and fatalities; improve public trust and confidence in the police,” said the police commissioner, Major General Antony Anderson, at the time.

The riders, perhaps, are still there. But not much, if anything, has changed for the better with respect to public order and safety. And certainly not – contrary to the expectation of the police chief – road collisions and deaths. There were 440 traffic deaths in 2019. In 2021, there were 487, up nearly six per cent. With road fatalities of over 15 per 100,000, Jamaica is just outside the top 100 countries for this category of deaths.

That, according to Mr Bunting, the shadow security minister, who once held the actual job, is indicative of the PSTEB’s failure. In the decade before the PSTEB’s launch, annual average traffic facilities were just over 300, with a high of 379 in 2017. That, and the fact that it is almost the norm for public passenger vehicles to disregard road rules, and for sellers in town centres to pay little heed to vending regulations, raise questions about the efficacy of the unit.

However, as Dr Jones pointed out to this newspaper this week, the blame for Jamaica’s road safety crisis can’t be placed solely on the police. Too many things, apart from law enforcement, have to come together to minimise traffic deaths – safe roads, safe speeds, safe vehicles, safe road users, and an efficient post-crash system.

Jamaica’s problem has also been exacerbated in recent years by an explosion of motorcycles, whose drivers and passengers now account for around a third of the island’s traffic deaths. Mostly, motorcycle riders don’t wear helmets. Yet, a World Health Organization (WHO) analysis four years ago estimated that, globally, the wearing of helmets would reduce deaths from motorcycle crashes by 42 per cent, and serious head injuries by nearly 70 per cent. However, that study showed that only six per cent of bike drivers and two per cent of their passengers regularly wore helmets.

Notably, road facilities are in the top 10 causes of deaths in the island, and about three-quarters of the people who die in road crashes are in the productive 15 to 64 age group. A half a decade ago, the World Bank estimated that traffic deaths and injuries annually cost 4.5 per cent of Jamaica’s gross domestic product.

The fact, therefore, is that road collisions, and the resulting injuries and deaths, are also an economic issue that demands serious policy attention across the government. It is part of the job of the NRSC to articulate these needs, which helps to explain why the sitting prime minister tends to be its de jure chairman.

In its early period, the agency delivered significant success. But it has now met roadblocks, and has insufficient muscle to push them out of the way. Our sense is that prime ministers are too busy to give the NRSC the attention it deserves – and it has no great standing as an agency of government. It perhaps needs refiguring and reconfiguration, in a way that brings road traffic issues to the centre of policymaking, taking into account the impact of road collisions on the national economy.