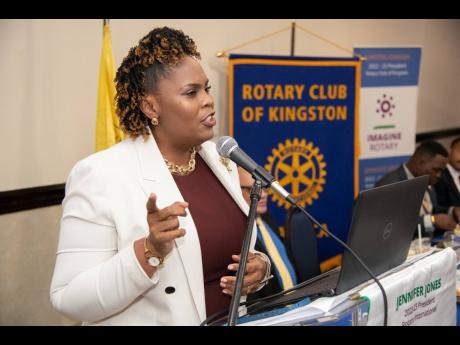 Gladstone Taylor
Hopefully, La Sonja Harrison’s recent public comments on the issue mean that the JTA is on its way to developing a clear policy on the matter and taking a leadership role in the discussion.

The question of how Jamaica teaches English in schools, and therefore the place the country affords the island’s Creole, was not a topic of the Jamaica Teachers’ Association’s (JTA) annual conference last month. Hopefully, La Sonja Harrison’s recent public comments on the issue mean that the JTA is on its way to developing a clear policy on the matter and taking a leadership role in the discussion.

Indeed, the JTA should have greater incentive to do so, now that the education minister, Fayval Williams, has signalled the Government’s willingness to engage in a broad policy discourse on the matter, involving various stakeholders. Ms Williams, however, has not as yet indicated a preferred framework for this debate.

The language question, especially whether the island’s Creole, or Patios, is a legitimate language and what status should be given to it, has been on Jamaica’s agenda for decades, but largely played out in academic circles. While their views have gained little, or at best slow, traction among policymakers, the preponderant position of linguists is that Jamaica Patois has evolved to a real and legitimate language.

It is merely ‘broken’ English, the naysayers argue.

Further, Creole/Patois is the mother tongue, or the primary language, of the majority of Jamaicans – the one they mostly use in their homes and communities, even though most people have a working grasp of English.

This tension between Patois and English, the language of instruction and business, and in particular students’ struggle with English, is increasingly obvious in Jamaica’s education outcomes.

While the Orlando Patterson-led commission on education reform did not address the language question in its report, it highlighted the fact, without stating a cause for it, that a third of the island’s grade-six students end their primary education illiterate – which means illiterate in English.

Further, 56 per cent of these students, that is, 12-year-old children, had difficulty writing. And in 2019, “57 per cent could not identify information in a simple sentence”. That is, a sentence written in English.

The crisis, however, does not end at the primary level. This year, for instance, 30 per cent of the students who wrote the Caribbean Secondary Education Certificate (CSEC) English exam failed.

Annually, a significant chunk of the expected secondary cohort, students who should have gone through five years of secondary education, does not write English exams at CSEC. And of those who remain in the system, a substantial portion is weeded out ahead of the exams. Even at that, the majority of those who pass do so at the lowest acceptable grade – three.

In the face of this crisis, a growing number of educators are concluding that the situation demands an acceptance that children struggle with English, the language in which they are instructed, and that there has to be a new approach to how English is taught. It should be treated as a second language, rather than assume it is the primary language of most students.

Or as Ms Harrison, the JTA president, observed at a meeting of the Rotary Club of Downtown Kingston last week: “We continue to have a struggle where we want our children to be proficient in the English language, but have we reached the place where we acknowledge that the mother tongue of more than half our population, or 90 per cent, is not English language? Are we willing to take on the approach that we actually teach English ... as a second language, and so translate and immerse the child into the English language? Not all children are coming from homes where their environment saturates them or orients them into speaking the English language as their first tongue.”

The discussion, however, tends to be derailed by an assumption by many that any acceptance of the legitimacy of Jamaican Creole/Patois equates to an attempt to displace English, and with it Jamaica’s ability to participate in the global economy.

“As it relates to the matter of Patois as a tongue and the debate on whether it is an established language or not ... does not negate the fact that the majority of our children speak it,” she said. “The approach is in how we teach English language, and it should take into consideration the fact that the child will express himself or herself better using that language, then you help them with the translation, as to say that ‘this is what you would say in English language’.”

Ms Harrison and the JTA, on whose behalf we assume she also spoke, cannot just end there. The association represents over 25,000 teachers, who, ultimately, will have to translate any language/teaching policy to tangible efforts in classrooms. They have an obligation, therefore, based on their experience and empirical research, to help guide us on what will work best in the classroom.

In this regard, if Ms Harrison is as convinced, as her remarks suggest, that the resolution of the language question is critical to fixing the education crisis, she should insist that it is taken aboard the transformation project.

Indeed, even ahead of formal policy, the JTA, working with the linguists who have researched these things, can devise ways for its members to be creative with the use of English and Creole in classrooms.