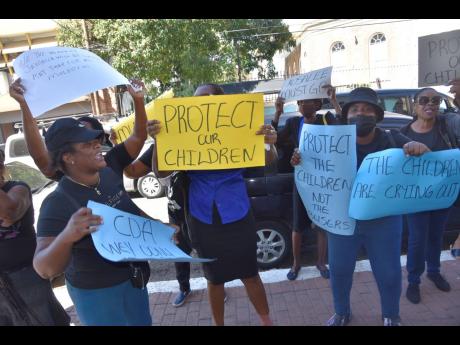 Many column inches have been dedicated to the treatment of children in state care, and this newspaper will keep asking the hard questions and hope for answers. We believe we owe an obligation to former wards like Monique Baines to keep an eternal glare on these issues until the country arrives at a morally decent place where each child in care is valued and treated with respect.

Monique Baines was one of the protesters who showed up at the Duke Street offices of the Child Protection and Family Services Agency (CPFSA) on Tuesday morning. Dressed in black like the other protesters, Monique called out the names of her alleged abusers and recounted her many unsuccessful efforts to get action from the then Child Development Agency (CDA). She was strident in her demand for justice.

It was simply gut-wrenching to hear Monique’s stories, including her experience with a member of the Jamaica Constabulary Force and the abuses she endured at the tip of his gun.

The CPFSA is an agency in crisis. Indeed, the extent of the dysfunction at the agency has been documented over many years. Management appears ineffective, and there is an obvious lack of oversight. For instance, why would the CPFSA maintain a partnership with an organisation headed by someone whose teaching licence had been suspended in the US for inappropriate sexual contact with a child? And why, even after he was reported for making sexual overtures to children in homes here, was nothing done? It took more than three years for the CPFSA to sever relations with the American at the centre of the controversy.

It is a fact that many of the children who enter state care have been exposed to neglect or abuse. Their new home should be a haven for them instead of becoming a continuing nightmare. Children in care ought to have a positive experience with their new family. Alas, very few stories of triumph emerge from these homes! Like Monique and her mother and her mother before her, a life in state care is likely to persist into many generations.

The United Nations Commission on Convention on the Rights of the Child states in its preamble: “... family, as the fundamental group of society and the natural environment for the growth and well-being of all its members and particularly children.” It is tough, maybe impossible, for the State to replace the family.

However, the State has a duty to safeguard and promote the well-being of its children. Each child enters the system with different needs. Some have mental issues, others have behavioural problems. We believe that the CPFSA would be doing its job properly if it were to assess each child and determine how best to satisfy these needs.

Accountability has been lacking at the CPFSA and its predecessor organisation, the CDA. From as far back as 2017, the agency was offering mea culpa for the way it has treated its wards. But the model remained the same.

After hearing Monique’s story, it is easy to feel deep despair about the status of children in our country. So far, we have had no indication that there will be any change in the way current wards of the State are treated.

The poster child for abuse, Monique mocked the system for creating a monster and vowed to continue to haunt them. Nothing but a systemic overhaul of the child services organisation will do. We submit that there is a desperate moral demand to realign priorities and create a new model of social care for the nation’s most vulnerable citizens.