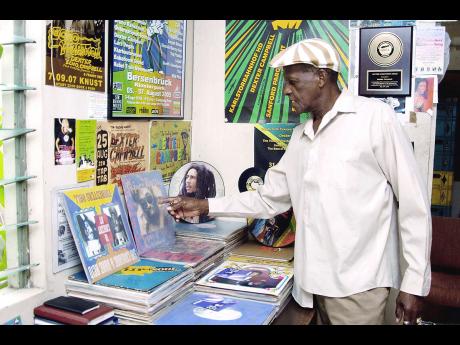 The Grand Caribbean Suite at The Knutsford Court Hotel was filled with nostalgic euphoria recently, as patrons, friends, well-wishers and vinyl record enthusiasts gathered for the launch of the 20th staging of the Vinyl Record Collectors Association (VRCA) Memorial Weekend Sit-In. The annual event, which is rotated among seven chapters situated in the USA, Canada and Jamaica, is having its fourth staging in Jamaica from May 26-29.

Ron Wilson, a member of the organisation and a record collector in his own right, kicked off the proceedings with vintage vinyl music, played from two turntables, sitting atop a platform, beautifully draped in black, green and gold - the work of Errol 'The Rock' McGowan.

President of the VRCA, Michael 'Louis' Owens, in his address, retraced the development of the organisation from a day in 1998, when a pool of collectors gathered at a friend's house in Philadelphia to enjoy the smooth sounds of vintage vinyl records. Thereafter, collectors from all over America kept coming each year at about that same time to enjoy what became known as The Memorial Weekend Sit-Ins. The event grew so much that by 2006 it became formalised and was registered as a non-profit organisation with chapters in Jamaica, Toronto, Florida, New York and Philadelphia.

Owens reiterated the point that the growth of the organisation, which later included other chapters in Connecticut and Atlanta, was due, in no small measure, to the hard work and dedication of its members. He considers the 20th staging as a milestone event, and for it to be held in Jamaica is an honour. Showering endless praise on the sponsors, Owens said: "We are truly thankful and appreciate of the confidence they have shown in us." He listed them as Red Stripe, Jamaica Tourist Board, JN Money Transfer - (Florida), Barita Investment, Lifespan Spring Water, Devon Bourne's Rubis, May Pen Ice, Securipro, Collectorskornernow, Kool97FM, and Fesco.

The four-day event will attract some 300 visitors from various chapters and will begin with a meet-and-greet session at Mona Visitors' Lodge on May 26. Party Night follows on May 27 at the Karl Hendrickson Auditorium, Jamaica College, with Senor Daley, Stokey Love and Michael Barnett at the controls. The premier event The Awards Banquet, takes place at Caymanas Golf and Country Club on Sunday, May 28 and features The Fab 5 band, Gem Myers and three record collectors, spinning discs from their personal stock. Jamaica will be represented here by Orville (Quillo) Morais. A Family Fun Day (picnic) at the Boone Hall Oasis in Stony Hill will bring the curtain down on May 29.

The Alpha Boys' School and Boys' Town HEART Skills Training Centre are two organisations that have benefited from donation through events' proceeds of VRCA. They have contributed to The Marcus Garvey Scholarship, offered to Jamaican students in Toronto by the Jamaican-Canadian Society, and to Scholarships in Hartford, Connecticut. Other beneficiaries are The Merritone Foundation and a number of health-care facilities. This year's Labour Day project at Boys' Town will see VRCA refurbishing the computer lab in a joint-venture project with Kiwanis Kingston.