Dub pioneer does not plan to retire any time soon 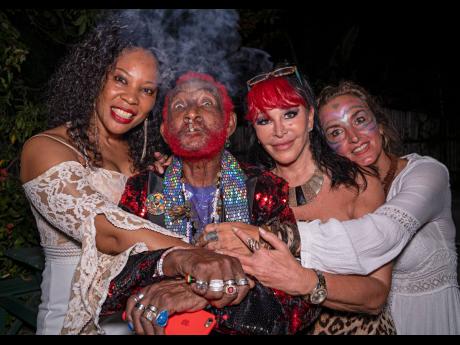 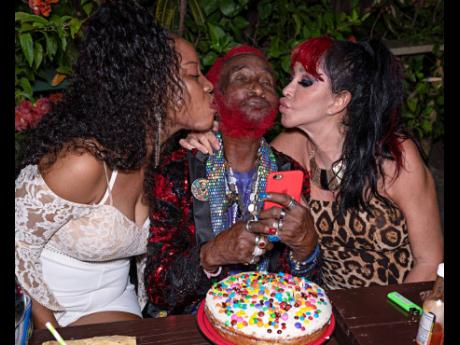 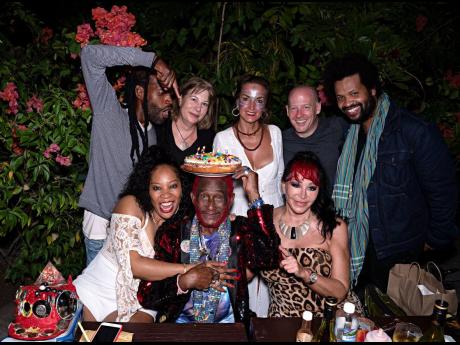 Contributed
Lee ‘Scratch’ Perry having a little fun as he is surrounded by family and friends for his 85th birthday celebration. Standing (from left): Brian; Karen Spinelli; Britta Slippens; Eric Schuman, who travelled from Switzerland for the dinner; and film-maker Damani Baker, who is hoping to make a movie with Perry. Seated (from left) are Marcia Reid, Lee ‘Scratch’ Perry and his wife, Mireille Perry.
1
2
3

Veteran recording artiste and producer Lee ‘Scratch’ Perry says that he is feeling as fit as a fiddle. “I have been well, me escape the devil. I turn 80-something and don’t look like that, me look much younger than that, and feel younger than that,” he told The Gleaner.

In true ‘Scratch-style’, he continued speaking in rhymes, “I still say Rastafari, the word is the power and the action and the artwork together. Rastafari in some land, it means hair or here … something strong. It’s not a joker, and Rastafari don’t take cocaine, Rastafari don’t feel no pain, and Rastafari makes it rain when there was no rain.” He lets out a laugh after being told that it sounded like he was trying to make another hit during his interview.

“Well, the Lord give me a long, life sentence; right now, I feel like forty, and if I live to 500 years, I will still do music,” Perry said, repeatedly noting that he has no plans to retire any time soon.

He added, “As long as me live, I am taking the music to a higher level because my music has no end, and it make you feel happy, turn you on and put you to bed … is total sex, I tell you.”

Having just turned 85 years old, Perry has been credited on a expansive collection of recordings worldwide, all the while connecting the foundation genres of ska and rocksteady, and reggae and dancehall, with international sounds of pop, rock and roll, punk and electronic dance music. Perry’s peculiar lyrics and style of dub helped charm the hearts of international heavyweights like The Beastie Boys and The Clash, who he has recorded with throughout his career.

“I feel extremely good,” Perry said about his accomplishments. “Is a clean and pure heart, and they that believe in God will not perish. He give me power, every hour.”

Before receiving commercial success, the dub pioneer, born Rainford Hugh Perry, worked as an apprentice at the renowned Studio One founded by Clement ‘Coxsone’ Dodd in the 1950s, which was also where he voiced one of his first recordings titled Chicken Scratch – and earned the nickname ‘Scratch’. Not long after, he moved on to work with Joe Gibbs, but decided to form the Upsetter Records label in the mid-1960s and released his official début single, People Funny Boy, which sold over 50,000 copies in Jamaica. He also built a home studio which he called The Black Ark, where he produced for many icons, including Bob Marley and the Wailers, The Congos, The Heptones, Max Romeo and Junior Byles, among others.

In his later years, Perry constructed another studio in Switzerland, where he has made a home with his wife, Mireille. The two have been married for 29 years but returned to Jamaica at the end of 2020 and have been considering relocating to the island permanently.

“I understand things different with the pandemic. God make happen, in the way it should happen for me to get some rest, and me need some rest. I am sad, but my fans known thunder and lightning, brimstone and fire; they will get to see me perform soon,” he said. “I am eating right, only vegetables, carrot soup, cocoa soup and callaloo soup – all types of soup – fishes sometimes, but God tell me not to eat dead flesh because what we give is what we get; so if we eat dead flesh, we inherit dead flesh. And start to say, well, Our Father prayer. I also do push-ups, normal exercises, which is like sexy art.”

Speaking about the vaccine, Perry said, “I don’t know what the Government here seek, or what the Americans or the English seek, or why they want to interfere with Jamaica’s inheritance. But anything happens, is that God want to happen.”

His wife quickly interjected, “We actually don’t plan to take the vaccine; we are preparing ourselves to stay in Jamaica.”

Only to hear her husband say that he was waiting for messages from the spirits.

He said, “I have to ask somebody over me, who is my spiritual leader and the spirits. If the Black Jesus say to take it, I will take it because I believe in the Black Jesus. Plus, Switzerland is a nice place – people don’t steal, any thief there is the bigger people – but I love Jamaica too much, just that there are too many people that have to beg, and you give one beggar, more come and you can’t help all.”

The couple celebrated his milestone birthday in the presence of close family and friends on Saturday, March 20, in Negril, Westmoreland, which is a welcome break from the constant rescheduling of tours and limited interaction.

“Me keep cool. She loves me, and me love her and the beach. She nuh want me go out leave her, and me nuh want her go out leave me. Is righteousness. She help me get strong, and we have to stay strong as a couple. The Lord is my shepherd I shall not want,” Perry said in jest.

His most recent album, Heavy Rain, was released in December 2019, a 12-track compilation that was declared his first No. 1 out of a catalogue of over 40 albums. With Heavy Rain, he was named as the oldest artiste to top the Billboard Reggae Albums Charts, debuting at number one. He hinted that two albums were currently in the making; one will be released in France and another in the United Kingdom.