Says sometimes he felt ‘washed up’ 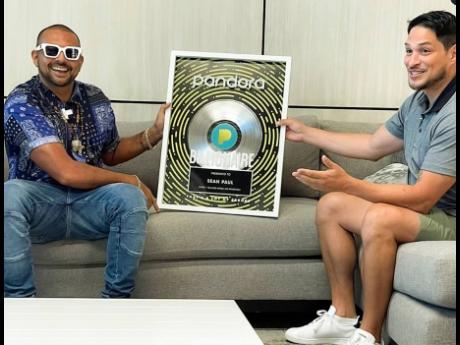 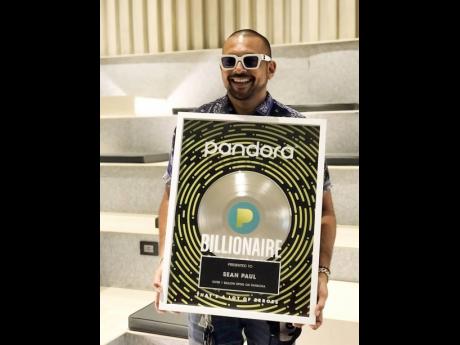 Photo by Stephanie Lyew
Sean Paul is the first Caribbean-based talent to be inducted into Pandora’s Billionaires’ Club..
1
2

Sean Paul said there were times when he questioned if anyone in the music industry cared about the steps he was making forward. “When you live in a small island like Jamaica, every year we look to specific events like Sting to hear new music and sometimes, as an established artiste you can feel washed up,” said Sean Paul during an interview at the AC Hotel, following his induction into Pandora’s Billionaires’ Club.

The Internet radio and streaming service surprised the We Be Burnin’ artiste this week with a plaque commemorating the milestone. He is now the first Caribbean-based talent to be inducted into the small elite group with international hitmakers from all genres, including R&B singing sensations Janet Jackson and Monica, gospel music’s Kirk Franklin and country-pop music singer Brett Young.

Sean Paul said acknowledgements such as this help to reaffirm that he is on the right path. “Those accolades serve to answer the doubts, especially knowing it was getting people to notice the Jamaican genres. I like a lot of different music, but how I express myself is through dancehall and to be accepted through international ears while pushing the music that way, it feels good,” Sean Paul said.

He said sometimes it becomes a challenge to represent the culture the way he knows how to. “I had to stand up for what I believe in when working with different labels and artistes, when they say ‘We think you should do this or work with that person’, and I would have to say that doesn’t match. For me and my genre, that is what is important to me, and I am not going to switch like that,” said Sean Paul.

High off the success of the Go Down D eh collaboration with Spice and Shaggy, Sean Paul, who has climbed close to 1.8 billion spins, is expected to reach the two-billion mark by the end of the year.

“No matter how big the pop music I do gets and no matter how much people here in the nucleus of the genre may think, ‘he has sold out’ or ‘he is not one of us anymore’, there have been many steps where I defended our culture and what we believe in – what we think is hot or not. And for that reason, I am proud of those steps I take. Every record label I have worked with, from VP to Atlantic to Island, I have experienced growing pains because there have been places I want to step to or they want to step,” Sean Paul shared.

Diego Herrera, Pandora’s head of Caribbean programming, called Sean Paul an ambassador for Jamaican music and culture. “He is important to the genre, not just as an excellent artiste but also, an ambassador of Jamaica’s music and culture. Not everybody that has reached a billion spins has been presented with a plaque. Of course, there are other artistes that have crossed over the billion bracket, for example legacy artiste Bob Marley, he is already well into that area, and yes, there are others trailing close behind, but specifically for dancehall, Sean Paul is leading the pack with what he has delivered,” said Herrera.

Herrera also credited the hard work and efforts of Sean Paul, Shaggy and Spice. “The three artistes on that track [ Go Down Deh] show incredible work ethic; they show they can be diverse by moulding themselves to other platforms or genres. Spice, being on television with Love and Hip Hop, Shaggy, being a man who wears many hats, and Sean Paul by not limiting himself in any way and collaborating with persons of different genres and experimenting with sounds highlights ways reggae and dancehall artiste can be diverse,” he said.