Iris King and the role of women in politics 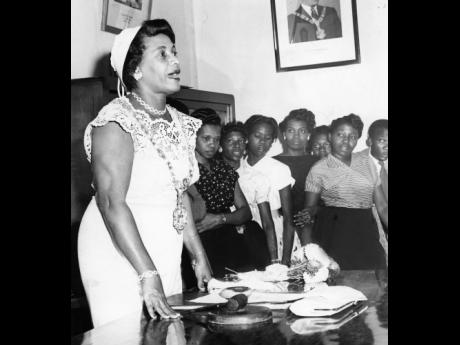 Growing up in the tough neighbourhoods of East Kingston in the early 1930s, Iris King, who was known for her kindness and dedication to service, knew one day that she would go on to represent the people of those volatile communities.

King was one of the first women to enter representational politics, championing the cause of the underpriveleged.

While her first career was that of wife and mother to her four children, King decided to immerse herself into Jamaican party politics, entering the fray in 1938, the year the People's National Party (PNP) was formed. She would go on to become an active political campaigner for the party.

Her earnest work for the party saw her taking on the role of councillor for the Kingston and St Andrew Corporation in 1947, after which she went overseas to further her education.

After three years of study, King earned a degree in municipal administration and political science and returned to Jamaica from Chicago in 1955. She was described in the Gleaner in 1958 as the only candidate offering themselves up for representation, who was trained and qualified as a politician.

Upon King’s return, she was immediately thrust into the thick of things as a candidate for the PNP in the general election of 1955.

Following her loss to JLP candidate Hugh Shearer, King returned to municipal politics, winning her seat as councillor for the KSAC with overwhelming support.

On April 9, 1958, Iris King earned the distinction of becoming the first female mayor of the city of Kingston, and the forty-first person to occupy the chair.

After she was elected mayor, she was invited by the United States government to spend two months on a study tour of the country.

The November 2, 1958 issue of Jamaica's Sunday Gleaner reported that on October 1, 1958, she was presented with a key to the city of Washington, D.C., by District Commissioner David Karrick during an official ceremony held in her honour.

As mayor she devoted much of her work to helping those who had fallen on hard times and making the lives of the underprivileged, especially in Western Kingston and their children better.

Her philanthropic efforts extended quite a bit outside of her political efforts. A wonderful example of that was King’s work with the Maxfield Park Children’s Home. King expended much effort in helping to expand and develop the institution, eventually becoming chairman of its board. To this day, the Maxfield Park Children’s Home has continued to change the lives of many.

In 1959, King, again, tried her hand at representational politics at the House level.

Her victory was rewarded after Prime Minister Norman Manley included her in his Cabinet. The PNP would go on to lose the 1962 elections and King would end her affair with politics in 1967, migrating to the United States, where she worked as a hospital administrator.