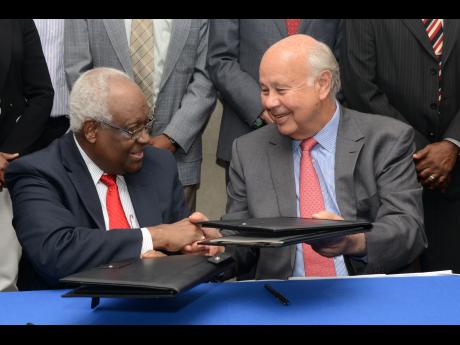 Ricardo Makyn
Media magnates J. Lester Spaulding (left) and Oliver Clarke shake hands on a deal for the merger of RJR and The Gleaner's medaia operations at The Jamaica Pegasus last week.

The stunning news of the RJR-Gleaner merger on the eve of Independence Day could be seen as fortuitous or brilliant timing, suggesting that this $1.5-billion deal actually strengthens independence. Lester Spaulding, RJR chairman and soon-to-be-head honcho of the super-media entity, said as much.

RJR News Online said: "Chairman Spaulding said that in the current environment, it is important that there is a strong, independent Jamaican media company." Spaulding said the current market was saturated. "When added to the recent moves by local telecoms to enter the media space, heightened competition is sure to put increased pressure on the industry. It is, therefore, very important that Jamaican media look also to shore up their resources in order to engage in the fast-changing landscape, as well as preserve the independence required for our media to do its work on behalf of the Jamaican people."

So this merger is to protect independence and safeguard the interests of the Jamaican people - media being a bulwark of democracy? But the media business is just that - business. It is about profit (which is okay). Just that capitalists find it necessary to cloak their profit motive with nice-sounding, noble words about the interests of the people, democracy and free speech.

The interests of the people can coincide with profit making. But don't you believe that business people invest their money simply as a democracy-promotion venture. The media business is about business. And this RJR-Gleaner merger is an excellent business deal. As to whether it is necessarily in the interest of the public, we will have to wait and see. No a priori conclusion can be drawn.

"This is the most exciting development for media in 50 years," Gary Allen, RJR Group managing director and soon-to-be-CEO of the merged entity, gushed. But most exciting for whom? Not for all the reporters at The Gleaner and the RJR Group, and certainly not for all the presenters and producers at Power 106, Music 99 and the RJR electronic media entities. It is not the most "exciting" development for Cliff Hughes and the Nationwide Group or for the other smaller media entities struggling to get their slice of the advertising pie. They did not have a worry-free Independence Day at all.

It might turn out to benefit some who are worried today, but right now there are deep anxieties. Butch Stewart might dig deeper into his very deep pockets in a bring-it-on show of strength, and the Observer staff might have to redouble their efforts to deliver an even stronger product. Butch might have to seek an alliance with the struggling CVM, which produces a top-class news product. It's "exciting" times for all these people, but I am certain the meaning of that word takes on a different nuance from Gary Allen's. We are, indeed, living in interesting times.

One senior journalist wrote me on hearing the bombshell announcement on Wednesday: "It is not good to have so much power concentrated in so few hands. RJR will trumpet big deals for advertisers ... . Is the RJR model of the late 1970s with a broad-based ownership structure still intact? Do trade unions have any real input on the board anymore?" My colleague bemoaned: "Look at what TV has become or is becoming, bit by bit more like THE STAR ... 'Dancin' Dynamites', 'Rising Stars', etc. Yes, there is 'All Angles', but think back to the days of JBC-TV and Brian Meeks- and John Maxwell-type discussion programmes that focused on public awareness. Of course, there was much to disagree with, but it was intellectually stimulating." Intellectual stimulation does not market well, though. Advertisers are not going to be falling over themselves to sponsor intellectually stimulating shows or to get spots in them. The market rules.

The Daily Veritas blog was quick off the blocks with a commentary on the very afternoon the seismic announcement was made. Corve DaCosta, in that piece, says: "This is the generation we are grappling with. Those who won't run to pick up a newspaper or sit before a television set for the news. The Facebook timeline and Twitter news feed has replaced old print and old radio. The synergies needed to exist in an economy that is constantly being disrupted by digital technologies do not rest in merger."

But a problem I find with many commentators - young and old - is that they rely on hunches, intuitions, and perceptions rather than empirical research. They are so Twitterised and Wikipediarised that they are averse to serious reading. The fact is that the reports of old media's death have been greatly exaggerated. In his piece, DaCosta bigs up digital media and sings its praises. I suggest he and others consult the authoritative Pew Research Center's State of the News Media Report 2015, published at the end of April. There he will find that in that most dynamic American media market, "Even as mobile and social news habits evolve, legacy platforms have by no means been abandoned. Local TV continues to capture broadcast viewers." Television ad revenues have actually been increasing in the US. And digital media have not been dong well, to put it mildly.

First Look Media, which was launched in January last year with a US$50-million infusion from its eBay founder closed a signature product, The Racket, before publishing a single story, reports the Pew Center report. The tech journalism outlet Gigaom founded with more than US$20 million in venture capital shut down March this year. BuzzFeed is overrated. Though print newspaper readership and ad revenues have been falling, "despite widespread talk of a shift to digital, most newspaper readership continues to be in print". Read that again. "Online, more traffic to the top newspaper websites and associated apps comes from mobile than from desktop users and the average visitor only stays on the site for three minutes per visit," says The State of the News Media Report 2015.

But if you want a really counterintuitive, disruptive read about the exaggerated impact of digital media vis-‡-vis old media, you have to read the recently released (June 2015) book by Michael Wolff, Television is the New Television: The Unexpected Triumph of Old Media in the Digital Age. Mr DaCosta should get a hold of it (It's available on Kindle if you don't like the antiquated form of books). Wolff declares boldly: "The closer the new media future gets, the farther away victory appears." He shows, for example, that even the venerable New York Times had predicted itself out of print existence, moving to digital publishing. Yet up to last year, 80 per cent of its revenues came from print. Digital media has been a revenue disaster.

Wolff tells us the thesis of his book: "This is a book about what happens when the smartest people in the room decide something is inevitable and yet it does not come to pass. Omens have been misread, tea leaves misinterpreted. Not only has the Web not destroyed TV, but the source of new media's strength - attracting ever more traffic, truly phenomenal traffic - may, in fact, become its greatest threat." Get the book.

The RJR-Gleaner merger makes absolutely good business sense. It will prove a significant benefit to advertisers and hence to shareholders. Television's impact particularly is phenomenal. The deals the RJR Group will be able to deliver to advertisers will be impossible to beat. This merger deal is a marketing person's dream. What no one can successfully contest is the enormous credibility, impartiality and balance which the RJR Group brings. Nor can anyone accuse The Gleaner today of being partisan, prejudiced or unprofessional in its practice of journalism.

The editorial leadership of both The Gleaner and the RJR Group is highly respectable. Gary Allen - whose remarkable rise in media has to be profiled - was absolutely correct when he said on Wednesday: "The combination of RJR's and The Gleaner's leadership in print and electronic media, our track record of credibility, our commitment to high journalistic standards ... are outstanding positives ... ." They are not perfect media organisations, but there is a commitment to fairness, balance and the pursuit of truth.

Media concentration has its serious problems, but the reality is that market conditions drive it, not conspiracy. Many media companies would simply go out of business anyway if they did not merge or were taken over. Journalists, rather than worrying about their jobs, had better equip themselves to do those jobs better and more rigorously. Don't let journalism be just another job. It is not. You have to be at the top of your game. It's the survival of the fittest. Get used to it - or get extinct.