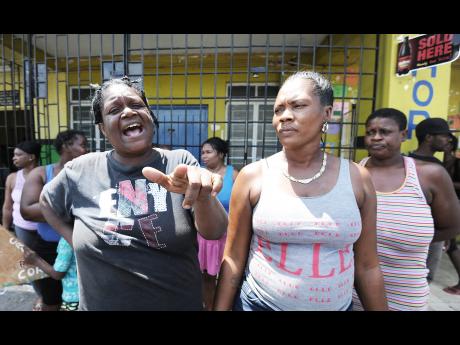 Ricardo Makyn
Vendors Norma-Dell Roman and Racquel Walker venting their disgust with the authorities for the demolition of their stalls and shops at Heroes Circle yesterday. 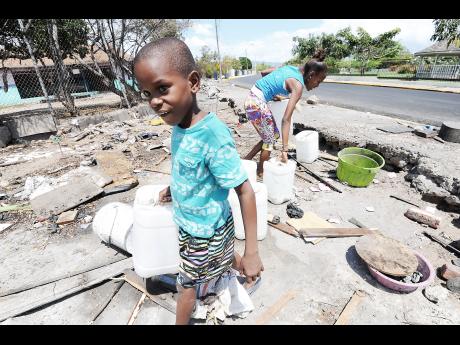 Ricardo Makyn
Toran Russell and his cousin Alice Waugh remove bottles from what's left of their grandmother's stall. She sold crab at the National Heroes Circle before the stalls and shops were demolished yesterday, Easter Monday. 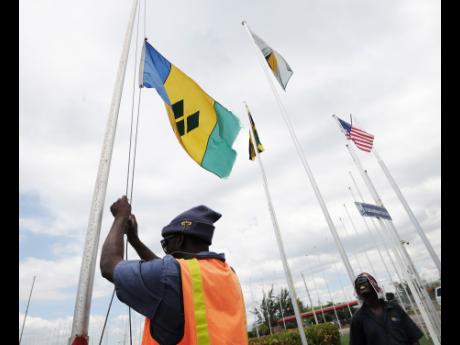 Ricardo Makyn
Workmen at the Norman Manley International Airport hoisting Flags at the roundabout in preparation for the arrival of the United States President, Barack Obama. 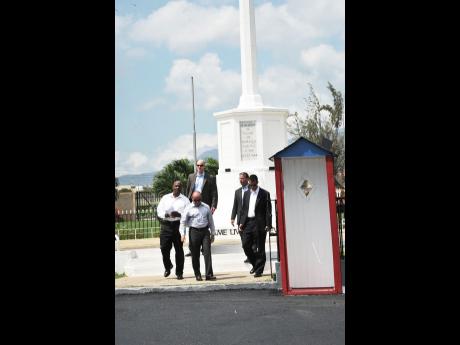 Norman Grindley
These men seem to be ensuring that the details are taken care of at The National Heroes Park in Kingston yesterday, where President Barack Obama is expected to visit. 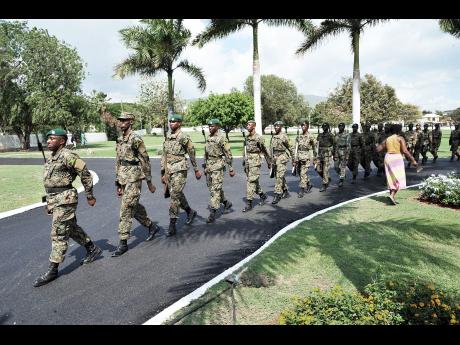 As preparation heightens for the arrival of United States President Barack Obama tomorrow, crab vendors who had become a fixture at the southern section of National Heroes Circle have been dislocated.

But even as they squeal, The Gleaner has been informed that this is only temporary, as Western Kingston Member of Parliament Desmond McKenzie is scheduled to meet with them as well as with Mayor of Kingston Angela Brown Burke

McKenzie, the opposition spokesman on local government and a former mayor of Kingston, told The Gleaner that he would be meeting with the vendors before holding talks with government officials.

Disclosing that both Brown Burke and Arscott have contacted him, McKenzie expressed confidence that the dislocation is a temporary one that will make way for more "acceptable" arrangements in the future.

McKenzie expressed under-standing of the discomfort brought about by the preparation for Obama's impending visit and appreciation for the consultations initiated by Brown Burke and Arscott.

As anticipation heightened, depression, doom, and fear of dislocation mounted as well, with some Jamaicans complaining that they are being made into "sacrificial lambs".

Female vendors who operated at National Heroes Circle mourned because the locale where they sell crab, roasted and boiled corn, roasted yam and salt fish as well as soup is no more.

With Obama scheduled to pay a visit to the National Heroes Park on Thursday, the prominent setting where many colossal Jamaicans are interred, the Kingston and St Andrew Parish Council moved in yesterday to demolish old stalls.

Only remnants of years of vending activities were to be seen when The Gleaner arrived at the area - an old pail, tarpaulins and a few pieces of broken board among the rubble. Vendors were dejected as they told our news team that they woke at 6 o'clock to witness their stalls being demolished by bulldozers, less than a week after they were "rudely told to move".

Reports that the vendors would be allowed to return to their old stomping ground should serve as good news for many, some of whom have been selling at the historic location for more than 40 years. Prior to that news, however, they vented their frustration about losing their livelihood.

For 40-year-old vendor Racquel Walker, better known to her customers as 'Marsha', it was a double whammy, as her mother, who was a vendor herself, died last Wednesday. Before the effects of her mother's passing could sink in, Marsha was hit with news that she would not be allowed to make a living there.

"The 16th of this month, my mother would be 71. She sold out here and this is what sent the 11 of us to school," said Marsha. "Now I am grown and I have five daughters of my own, and this sends them go school. More than 100 children have been dislocated along with us."

"What we going to do now? We can't go down to Parliament to ask them for lunch money for our kids to go school," added Marsha.

A 50-year-old vendor and mother of seven, known to customers as 'Day Girl', could not hold back the tears as she vented.

"I can't write, but I can read a little, and I don't want my seven children to be in the same position that I am in," said Day Girl. "So what should I do? My great-great-grandmother sold out here, and now this, and so sudden."

Alice Waugh, another vendor, lives in Spanish Town but makes her way to the National Heroes Circle to make a living. So does her 26-year-old daughter Shanakay, as well as Precious Stewart, a resident of Maverley.

They said they were unable to comprehend why the small vending area, which had been the subject of many media features both internationally and locally, has suddenly become unacceptable with the impeding visit of the US president.

"We have sold crab and corn to lawyers, doctors and even politicians over the years. Why has the place now become an eyesore and why were we told only a few days before, on Holy Thursday?" asked Marsha.

"Are we to starve when President Obama returns to his home?" chipped in Day Girl.

The vendors said they have been asked to attend a meeting this morning at 10 at the now-abandoned site.

The well-trimmed lawns of the National Heroes Park and new-look roads, all the way through to the Harbour View roundabout, where vendors were also dislocated, clearly showed signs of Obama's impending arrival.

Workmen putting finishing touches on the outskirts of the Norman Manley International Airport, along with the US-owned helicopters waiting on the grounds, and the rehearsal of Jamaica Defence Force soldiers at the National Heroes Park confirmed what many Jamaicans already knew.