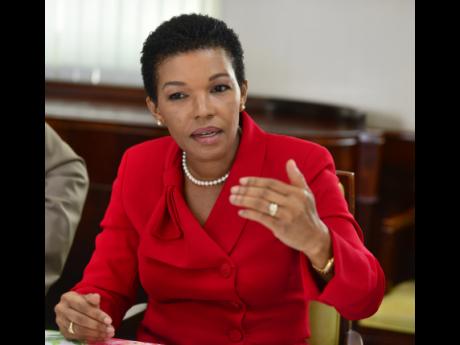 FORMER Jamaican ambassador to Washington Audrey Marks would like the Jamaican Government to use Thursday's bilateral meeting with United States President Barack Obama to negotiate for a special internship programme to allow Jamaican graduates to work in the United States, gain experience and send home remittances.

Marks, speaking at a Gleaner Editors' Forum held at the company's North Street offices in Kingston last Thursday, said such a programme was proposed three years ago by members of the diaspora, and that it would be good if it is placed on the agenda by Prime Minister Portia Simpson Miller in her discussions with Obama.

"A number of business people in the Jamaican diaspora were interested in investing in a programme where you could have our young people trained in specific areas that would see them take jobs that are there in the United States where people are having difficulties recruiting. They have to go as far as India," Marks said.

She said based on the discussions that came out of the Caribbean Ideas Marketplace, members of the diaspora believe the programme could be put in place with the support of the US government. The Caribbean Idea Marketplace, launched in Jamaica in 2012, is a structured business competition with the main objective of fostering collaboration on innovative projects between Caribbean entrepreneurs and those in the diaspora.

"We have somewhere between three to five million people in the diaspora, to count Canada and England. In the US, for sure, [there is] around three million people. They are passionate, they want to invest in Jamaica, but there is a trust deficit," Marks said.

"This is why it is so important. If you have any initiative which involves the United States government, through the State Department, it nullifies that trust deficit, to some extent, because they know there will be accountability," the former ambassador said.

Marks argues that the US has a "great strategic interest in seeing the development of the countries in the Caribbean" and would not, therefore, be opposed to embracing a programme similar to the one proposed.

"We should change the focus in all our discussions with the United States on security from more speedboats and more guns. The US is interested in seeing that the neighbouring countries have economies that are growing. We have to start focusing our attention not only on the symptom that is crime, but the underlined factors of unemployment and declining economic opportunities and look at strategies that would impact there," Marks said.

The former ambassador said while the United States government will have a focus on ensuring that its citizens are able to secure employment in their country, "it does not deny them looking at how we can also put in place a programme that will have an impact on the two major causes of crime in the region".

Added Marks: "It is very important that we look at providing a pathway to increased employment of Jamaicans."

Obama's visit follows the 2011 visit of then Secretary of State Hillary Clinton. Marks, who was Jamaica's ambassador to Washington at the time, said the discussions then centred on how the State Department would put a focus on generating investments in the Caribbean.

"Just three years ago, Secretary Clinton came to Jamaica and we were working hard and looking at how to utilise the diaspora. The diaspora is not totally understood as far as I am concerned. We know about the diaspora in the context of remittances," Marks said.

She said that about two per cent of Jamaicans in the diaspora are extremely wealthy and another eight per cent somewhat wealthy.

In addition, Marks said that there is a 30 per cent segment of Jamaicans who are looking for opportunities to invest in Jamaica and 60 per cent who send back remittances on a continuous basis.

"We have never really gone after that 40 per cent," she said.