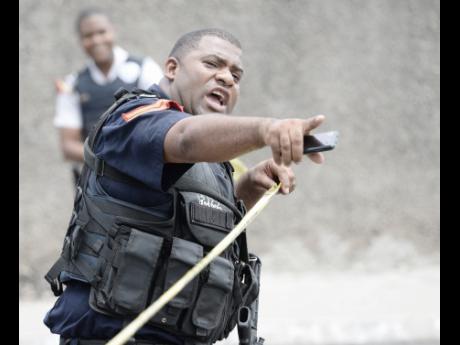 Jermaine Barnaby
A police officer shouts instructions on the crime scene where a man and a police officer were shot during an attempted robbery in Papine, St Andrew, yesterday.

A constable attached to Gordon House was yesterday shot after he intervened in an attempted robbery of a Jamaica Urban Transit Company (JUTC) bus.

The Gleaner has learnt that two men, who seemed to have been taking advantage of the 'sick-out' by members of the police force, boarded a No. 77 bus in Mountain View and travelled to Papine.

When the bus arrived at the bus stop at the Papine Market, one of the men held the driver at gunpoint and requested that he hand over the money collected from passengers.

Unknown to the men, however, was that an off-duty policeman was a passenger on the bus.

It is reported that the cop interrupted the robbery and, in the process, sustained a gunshot wound.

"A police from the Special Services Branch has been injured in what was an attempted robbery. One of the accused was also injured ... ," said Senior Superintendent (SSP) Fitz Bailey.

When a Gleaner team visited the scene, police had cordoned off the Papine Market and were canvassing the area for the other man involved in the attempted robbery, who is believed to have fled with an injury.

Eyewitnesses told The Gleaner that a litany of gunshots were fired, resulting in much panic. This state of confusion during the rapid gunfire was confirmed by councillor for the Papine Division, Veneisha Phillips, who was at the University Hospital of the West Indies.

"We really are still trying to understand what happened, because there was a lot of gunshots fired, so I am here just to provide support for the police officer and his family," she said.

SSP Bailey said the constable was "not in a critical condition and is expected to be released as soon as his treatment is complete".