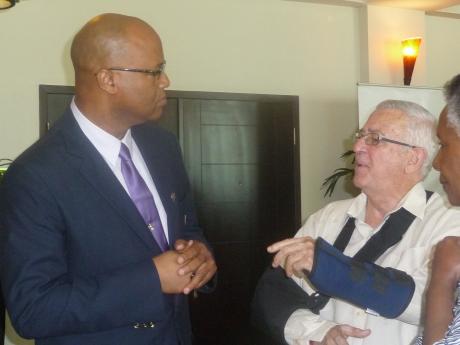 While the Jamaica Teachers' Association has voted to accept the government's offer of seven per cent increase in salary over the next two years, some teachers, albeit a small minority, remain unhappy with the deal that was agreed to.

"Although it was a majority decision, it was not a unanimous decision, and it shows that persons were really not for it, and even some persons who would have voted for it really did not think it was a meaningful offer."

The JTA delegates who attended the conference voted on Tuesday to accept the government's offer of a seven-per-cent wage increase for the 2015-2017 contract period, which would see public-sector teachers receiving a four-per-cent increase in the first year, and an additional three per cent in the second year.

One hundred and fifty-one ballots were cast during Tuesday's meeting, with 93 votes accepting the government's offer and 55 voting against it. Two ballots were spoilt, and one was unmarked.

Before the vote being taken on Tuesday, public-sector teachers across the country had declared that they would not be accepting the seven per cent increase offer.

But speaking to the sudden change of heart yesterday, Allen said he could not account for why the delegates voted to accept the offer.

"What caused them to turn (voting to accept the wage offer) in the way they did, I really could not say; if they get to a point to say 'we are going to accept', we do not ask why," said Allen. "It was a long and rigorous debate, because there were persons who believed this was something we could accept, and there were persons who believed that this was a slap in the face."

Allen continued: "I do not think it (the vote) has changed the minds of people, because they still believe that it is not something they can be comfortable with, but whatever caused them to take the decision that this is what they want, we have to accept it as an association and put our personal views aside and go with what the teachers say they want."

During his keynote presentation yesterday, Education Minister The Reverend Ronald Thwaites said the government would make the necessary adjustments to meet the obligations of the wage offer to the teachers.

"The government will have to readjust all kinds of fiscal priorities to meet what is agreed; certainly the Ministry of Education has been doing so and will continue to do so, so we can play our part in creating the fiscal space to meet the obligations we have agreed to," said Thwaites.