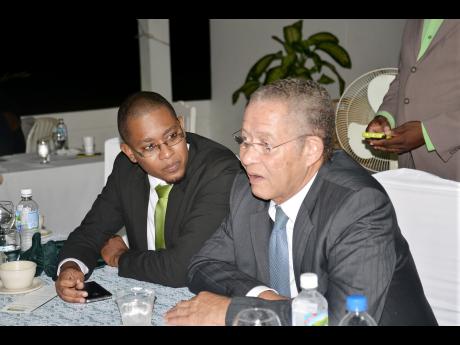 Former Prime Minister Bruce Golding says the Government of Jamaica has allowed itself to be tricked by multilateral organisations into entering agreements which are detrimental to the development of the country.

"The Government has allowed themselves to be hoodwinked. And I say so authoritatively, you know, because I have had many discussions with them and they tried to hoodwink me, too," Golding said during a Jamaica Labour Party (JLP) South West St Elizabeth Constituency Awards Banquet in Black River on Saturday night.

"The multilaterals - the International Monetary Fund (IMF), the World Bank, to a lesser extent the Inter-American Development Bank (IDB) - they have this notion - it's almost like theology to them - that if you get your fiscal house in order; if you reduce your debt; if you cut your expenditure; if you tighten things and you get your budget and your fiscal arrangements in good order, 'listen nuh, man, you goin' frighten to see how investment and growth take place'," Golding quipped.

"And I remember arguing with them, here and in Washington, that 'I know that is your theory. I followed that while I was a student at university. But that's not how it goes ...'," he added.

Golding said the Government should conduct analysis to ascertain what was hindering Jamaica from attracting more of the investments it desires.

"And one of the things I think the Government ought to do - take this as a criticism out of genuine concern - I think that the Government needs to pull together all of its technical agencies, the PIOJ (Planning Institute of Jamaica) perhaps could lead it, pull the private-sector leaders together, call in the multilaterals. A serious analysis needs to be done to find out what is preventing investment from taking place. I say that particularly because there is a lot of investment capital around," he said.

"If a way is not found within the framework of the programme, the multilaterals are just going to have to recognise that the programme is not going to be able to achieve its objectives unless it is calibrated in such a way that it cannot only accommodate but, in fact, stimulate investment," Golding said.