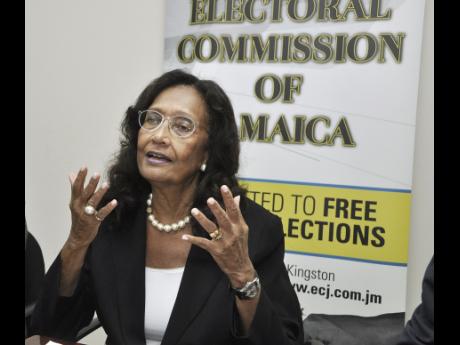 The Cabinet could be stripped of the power to propose new dates for general elections in certain circumstances if Parliament agrees to a recommendation from the Electoral Commission of Jamaica (ECJ) to have the Constituted Authority advise the governor general of the postponement of elections at those times.

The ECJ has proposed to amend the Representation of the People Act (ROPA) to give the Constituted Authority the responsibility to advise the governor general of a postponement of elections where it is a likelihood that the official lists for all constituencies for any particular constituency will not be printed before the day appointed for the holding of the poll or that any essential electoral supplies or materials will not be available in adequate quantities on such day.

Additionally, where there are riots, open violence or other civil disturbance that is likely to impact the printing or supply of materials before the day, or interruption, obstruction, or abandonment of the electoral process as to prejudice the holding of a fair election, the Constituted Authority may advise the governor general of a postponement of elections.

The Constituted Authority comprises four selected members of the commission and two other persons appointed by the governor general after consultation with the prime minister and the leader of the Opposition, one of whom shall be a retired judge and one being a member of the Privy Council.

"The background to this recommendation lies in the fact that in 2007 there was the unprecedented event of a general election that had been duly called being postponed because of the passage of a hurricane in the period between nomination day and election day," the ECJ report stated.

At present, the power of advising the governor general of the postponement of elections rests with Cabinet.

However, the ECJ, which is chaired by Dorothy Pine-McLarty, is proposing that the Cabinet's role in advising the governor general to postpone elections be limited to circumstances such as if there is the occurrence of any earthquake, hurricane, flood, fire, outbreak of pestilence or outbreak of infectious disease or other calamity.

The Cabinet is also empowered to advise the governor general of a postponement of elections if there is a proclamation of a state of emergency under the Emergency Powers Act, or there is war.

A parliamentary convention for ECJ reports to be adopted without amendments means that the proposals will almost certainly become law.

The proposed amendments to the law follows a major stand-off with the Portia Simpson Miller-led Cabinet in 2007, which was upset that the ECJ had gone straight to the governor general with a proposed new date for a general election without consulting with the executive.

The general election was scheduled for August 27, 2007, but was postponed until September 3 because of the passage of Hurricane Dean on August 19.

The Simpson Miller administration met for an emergency Cabinet meeting after it was felt that the authorities blundered when the ECJ submitted its recommendation directly to then governor general, Professor Kenneth Hall.

Then Information Minister Donald Buchanan said Cabinet formed the view that the ECJ recommendation for the postponement of the general election should have been submitted to Cabinet for consideration, before it was sent to the governor general for a final decision.

"I was very upset," Harry Douglas, a four-time member of parliament in South East St Mary at the time, told The Gleaner last week.

"I thought it was wrong, but I think it was done in good faith," Douglas said.