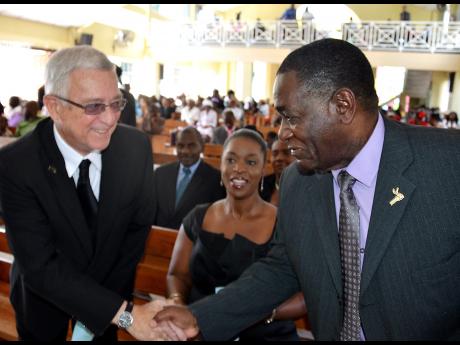 Education Minister Ronald Thwaites believes that in light of the ongoing trend of some of the nation's top mathematics and science teachers leaving the classrooms to take up better-paying jobs here or abroad, additional inducements are needed to encourage them to remain in the schools.

"We will have to find incentives to give them to make the teachers in the scarce disciplines remain in Jamaica," Thwaites told The Sunday Gleaner.

"I think there should be a premium of some sort on their employment."

According to Thwaites, some 70 mathematics and science teachers have exited Jamaican classrooms since January, with the number expected to increase.

"There are probably more (teachers) who have applied for leave and don't have any intention of coming back," said Thwaites.

"It is a serious problem. It was one of the things that made it necessary for us to endow 100 scholarships for math and science teachers to replenish the supply.

"Those that have the most qualification and experience were actively recruited many years ago by the United States, and this year particularly in England. We can't stop them from going, so what we have to do is replace them and train enough."

According to Thwaites, the local teaching fraternity is short of approximately 500 teachers, with the majority of those required to teach mathematics and the sciences. This has resulted in many unqualified teachers having to fill in.

"There is an intensified programme of upgrading the math teachers who are in the classroom, as many would not have had the level of qualification of those who have left," said Thwaites.

"There are people teaching math in all the schools, but there is a long-standing problem over all the generations where the majority of them are not qualified."

Thwaites is encouraging teachers that when they are choosing careers to choose the areas where there is the greatest need, instead of choosing the easiest course or something that appears to them to be interesting.

In the meantime, Thwaites is looking to the private sector as a stop gap for the current shortage of qualified mathematics and science teachers.

"In an immediate response, we are asking people in the private sector to volunteer; it is not the same as a full-time teacher, but in many instances it can make an appreciable difference."