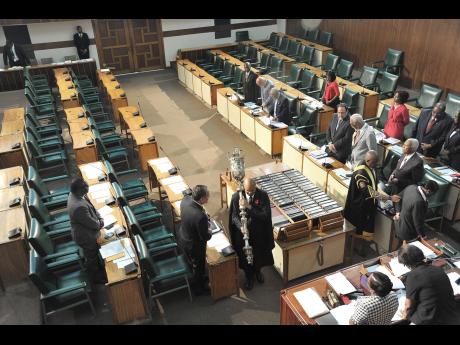 A long-standing Government senator said yesterday that Jamaicans would be lacking in pride if they dare to hang on to the Judicial Committee of the Privy Council as the country's final court of appeal.

Navel Clarke, a trade unionist by profession, said in the Senate yesterday that "we must show our pride" and move away from the Privy Council and embrace the Caribbean Court of Justice (CCJ) in its appellate jurisdiction.

"They are begging us, they are pushing us, they have said things that I don't think anybody with any pride would want to continue to endure," said Clarke, who has also lived in England.

The Government senator was making his contribution to the debate on three CCJ bills that are now before the Senate.

The debate had been suspended due to a boycott of the Senate by opposition members but two of the eight, Tom Tavares-Finson and Kavan Gayle, showed up yesterday.

Clarke, noting that former Prime Minister Hugh Shearer in 1970 proposed that Jamaica join with other regional countries to form a Caribbean Court, said that for the Opposition members to now turn its back on an idea cultivated by one of their leaders defies logic.

He said too that the insistence of the Opposition for the matter to be put to a referendum flies in the face of a judgment of the Privy Council which said there was no need for one.

"Is it to say that because some people feel that there ought to be a referendum that there should be one? The court has ruled. Our final court has ruled and there is no matter that has been brought before this body, the Senate or the House (of Representatives), to suggest that they were wrong," Clarke said.

"Why then are we calling for this ... the insistence by some people to overrule and disobey what the court has said and in so doing drag the people of Jamaica down with them?" Clarke asked.

In questioning the Senate about its purpose, Clarke said that members should take note of comments made by several eminent British jurists who have expressed the desire for Caribbean countries to leave the Privy Council and set up their own courts.

Quoting Lord Browne-Wilkinson, who said, "Our valuable judicial resources should no longer be used on resolution of disputes from abroad. It its time to bring down the curtains on the British legal Empire", Clarke said: "The time has come for us to once and for all divest ourselves of this British colonial system that has been with us for over 300 years."

Meanwhile, Norman Grant, another Government senator, indicated he would be voting for the CCJ bills because they would help farmers get justice.

"I am convinced that this is a court whose time has come and I will vote to the affirmative for its establishment in the best interest of my coffee farmers, my cane farmers, my banana farmers, my livestock farmers, my vegetable and domestic crop farmers across the length and breath of Jamaica," said Grant, who is also president of the Jamaica Agricultural Society.