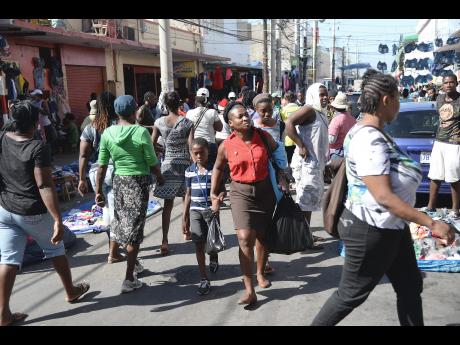 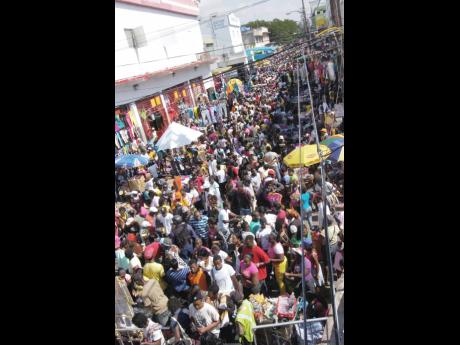 File
Christmas bought buyers and sellers onto the streets of Kingston in droves as this file photo shows. However, up to yesterday, the crowd had not reached this size in the capital city but merchants were hopeful.
1
2

At this time last year, retailers were lamenting slow sales for what was usually a busy shopping period. This year, depending on where the business is located in the country, there are slight improvements, with the hope of a bumper crowd by the time Christmas Day comes around in a day's time. Or the season is limping, but there could be a surge in the next couple of hours.

President of the Jamaica Chamber of Commerce (JCC) Warren McDonald has indicated that the business community could see a moderate boost in sales this year.

"I don't have much knowledge at this point as to what is happening, particularly in the downtown Kingston area, because I have not had word with my members yet. The feedback I'm getting, however, is that things are coming on and persons are expecting a bumper crowd during the last two days before Christmas (today and tomorrow)," McDonald told The Gleaner in an interview yesterday.

"There is some swing depending on the type of business because since last Friday, restaurants, in particular, were all full and the regular Christmas shopping was taking place. I don't get the feeling that there is a real surge, but I gather that there has been improvement when we compare with previous years," he said.

Making reference to a recent statement by the Bank of Jamaica (BOJ), which reported that there is more money in circulation at this time of the year, McDonald said that businesses could see a slight boost in sales when compared to other years.

"I certainly wouldn't say things have deteriorated. The BOJ says more money is in circulation, over and above the inflation rate, which would indicate that people have more money, so I'm hopeful," the JCC president said.

The BOJ said on December 11 that the stock of currency in the hands of the public and in the vaults of financial institutions was $72.9 billion. It said that this represented an increase of 14.1 per cent over last year.

In the meantime, Gloria Henry, president of the Montego Bay Chamber of Commerce and Industry, has painted a somewhat different image in the western part of the island, noting that people were yet to see drastic sale increases.

"I have not done a wide-scale analysis. I have only spoken to persons within the Fairview business community (a location in Montego Bay), and the feedback is that things are not as busy as before," she said.

"It seems, however, that persons are doing their shopping in the nights or they are waiting 'til Christmas Eve. The town is quite congested, however, and persons are engaged just the same," Henry said.

The president also pointed out that there were several options available for persons to shop, which could be a contributor to the slow build-up.

"I think persons have more platforms, and what I have been gathering is that more persons are shopping online. Everywhere you go, there is somebody who tells you that they shop via the Internet," she said.

"People are probably still shopping, but as we advance in technology, people are making use of that. Everybody is trying to avoid the congestion and looking at ways to reduce cost for transportation, so I believe that could be a factor," she declared.

Last year, retailers told The Gleaner that they were holding out hope that the traditional Christmas shopping would improve as they lamented slow sales.

Vendors in downtown Kingston, as well as some merchants in Half-Way Tree, St Andrew, indicated that there was a slow build-up to the period, with some saying they did not expect much more robust business in the few days left before the Christmas holiday.

President of the Small Business Association of Jamaica Hugh Johnson has said that marketing would be key to bringing in shoppers, even as he conceded that there were "mixed feelings" among merchants in the organisation.

Another 'Best' for Kingston Wharves
No pat on the back!
BOJ Jamaica Chamber, weigh implications of 'surprise' Brexit
Time to demand more
Jamaica Chamber of Commerce boss wants new approach to divestment