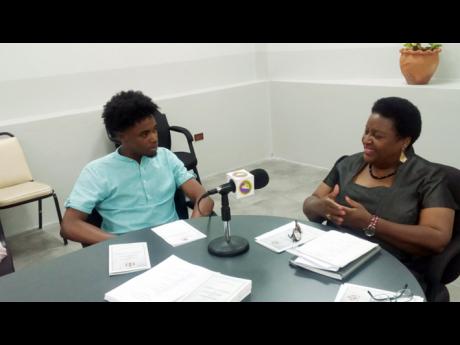 "If I were to vote, I would be voting for better," says Dalton Harris, an entertainer and the 2010 winner of Digicel's 'Rising Stars' competition.

The young entertainer says that the manner in which politicians are conducting themselves on the campaign trail, however, is not an incentive for him to exercise his franchise.

Harris was among a group of three entertainers, who, yesterday morning, paid a courtesy call on Political Ombudsman Donna Parchment Brown at her offices located at the Jamaica Manufacturers' Association headquarters on Duke Street in Kingston. The other two persons in attendance were Junior Lincoln, president of the Jamaica Reggae Industry Association, and producer Donovan Germain.

Harris says when politicians cast aspersions on each other's integrity, it pushes him further away from the political process.

"One of my biggest concerns is that at election time, one party is always trying to discredit another party's integrity," he said, arguing that this only served to bring all politicians into disrepute and, ultimately, leaves some Jamaicans disinterested in politics.

"If you expect your people to believe what you are saying, then it's going to be all discredited integrity," he said of politicians who speak ill of each other.

While acknowledging that both political parties have crafted positive plans for the country, Harris said that they have not convinced him to cast his ballot on February 25, when the country votes for a new government.

"It's my right to vote, but it is also my right not to ... until I feel that there is a greater good. So right now, mi a hold off and a do a little bit more research," the entertainer reasoned, noting that he would not be lumped with those who show allegiance to a political party because their parents supported that party.

In her comments, Parchment Brown praised Harris for his sobering remarks.

On the topic of sullying each other's reputation on the campaign trail, the political ombudsman said: "When you dirty up one person, your hands look dirty. It is difficult to dirty up somebody else without some of it sticking to you.

"If you tell me dirty things about the other person, then I am going to stop listening," she said.

She added, however, that she did not believe that the majority of politicians spoke ill of their opponents.