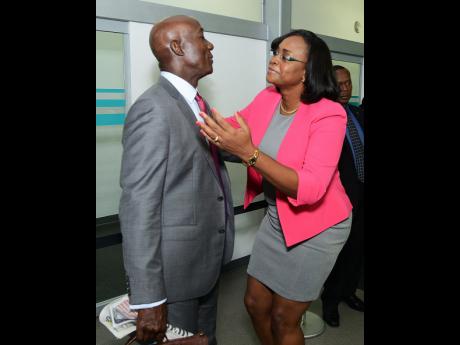 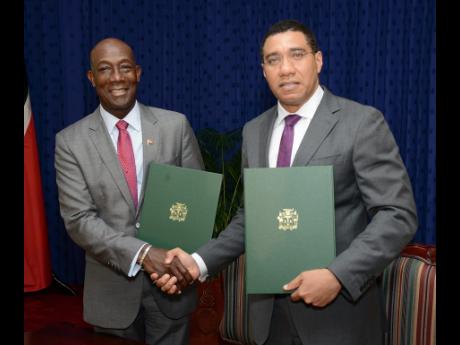 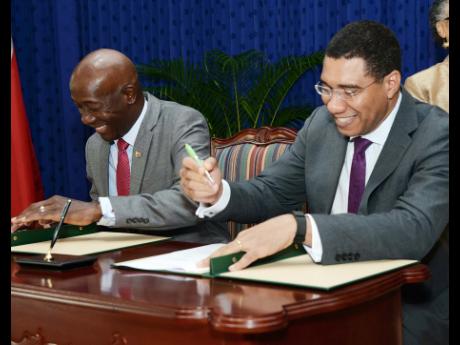 Ian Allen
All smiles as they ink the communiqué.
1
2
3

Years of anger, bitterness, and divisive rhetoric coloured by threats of boycotts seem all buried, with Jamaica and Trinidad and Tobago, now, in almost triumphal tones, declaring that the relationship between Kingston and Port-of-Spain has been "reset" and the friendship "restored".

Amid songs of praise yesterday at the conclusion of bilateral talks, Dr Keith Rowley, the Trinidad and Tobago prime minister of 10 months, and Andrew Holness, whose second premiership is just five months old, confirmed that the relationship between the two Caribbean Community (CARICOM) countries had indeed been anything but friendly in recent times.

"At the end of the day, there is greater clarity, greater understanding, and most importantly, restored friendship," Holness said at a final press conference, where he also said that Rowley's five-day visit had been used to ?reset? the relationship between the two countries.

The two signed a final communiqué, the details of which have not yet been released. But Holness, who spoke first, said Jamaica was satisfied with some of Trinidad's specific responses to issues of trade and immigration that have strained the relationship between the two.

"Prime Minister Rowley has given the assurance that his government is taking the necessary steps to improve the situation and effectively implement the undertakings agreed between our two foreign ministers," he said.

Holness added that he was encouraged that a facility at Trinidad's Piarco International Airport, to suitably accommodate people denied entry, would be completed by the end of this month. There is also the ongoing training of immigration officers to deal with travellers.

Regarding trade, Holness said that both of them agreed that there was need for improvements in relations and the removal of impediments to deepen free trade.

Rowley reiterated the importance of his visit to avert what he called a trade war, largely occasioned by the constant complaints by Jamaican businesses about alleged unfair trade practices by their Trinidadian counterparts and the March saga surrounding the refusal of entry to about a dozen Jamaicans.

"Not every day that the prime minister of Trinidad and Tobago and Jamaica, or two prime ministers at all, get to spend all day and maybe all week working on issues that are of vital importance to the territories," he said.

Although the full details on the future actions have not been revealed, Rowley said, "If we had not agreed to take the initiative to put to an end what was festering between our countries, the consequences could have been quite dire for our business communities and for our countries as a whole."

Security, air and sea transportation, energy, tourism, and technical and culture cooperation were among the other issues addressed.

Holness has accepted an invitation from Rowley for a Jamaican delegation to visit Trinidad and Tobago to continue the talks.

Meanwhile, Senator Kamina Johnson Smith, foreign affairs and foreign trade minister, told The Gleaner that a cooperation agreement, which was expected to be signed, was still being worked on.

Months ago, calls were renewed for a Jamaica boycott of Trinidadian goods and services, with leading private-sector players insisting that the regional movement could be a waste if trade and immigration issues with Trinidad and Tobago were not fixed. Those issues have helped push Jamaica to review its place in CARICOM.

But yesterday, Holness, whose CARICOM scepticism seemingly has waned, preached that "this is a time for bold leadership and courage to make the right decisions to chart new pathways to reset understanding and not to be tempted to base our decision on narrow self-interest".

Helene Davis-Whyte, president of the Jamaica Confederation of Trade Unions, said the visit was timely and the reported outcomes should be welcomed.

"It was a timely one (because) the situation seemed to have been getting out of control. What needs to be done now is to wok to ensure that whatever is decided is implemented," she told The Gleaner.

Jamaica's total exports to Trinidad and Tobago for the first four months of this year amounted to J$178.9 million

At the same time, Jamaica imported goods worth more than J$13 billion from Trinidad and Tobago.

Jamaica and Trinidad and Tobago established diplomatic relations on June 18, 1963.