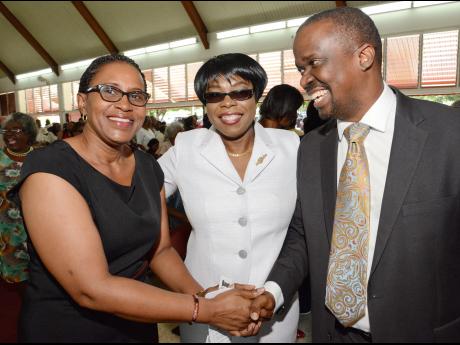 Deputy Commissioner of Police Novlette Grant yesterday served notice to Jamaicans not to expect any crime-fighting miracles when she officially takes command of the Jamaica Constabulary Force (JCF) and its auxiliaries as acting commissioner of police for a 90-day period, starting next Saturday.

"Please, don't look to me to create the world in seven days. I never claimed to have that power ... . And I will not be working any miracles, except that miracle comes from the people of Jamaica to renew their hearts and their minds and attitudes to become our brother's keeper in the truest sense of the word, by following the example of the Samaritan," Grant told worshippers at the Boulevard Baptist Church in St Andrew.

The deputy commissioner, who will step in for Dr Carl Williams when he demits office on January 6, used the church service to appeal for unity in healing the country in light of the 1,350 murders reported in 2016.

"As we see the possibilities of 2017, stand with your nation [and] pray for renewal of spirit in ourselves and in our brothers and sisters and let our lights shine, please, in cultivating an attitude of gratitude," Grant said before making a case for the men and women under her command.

"I am commending to you, though, that you practise showing appreciation for those who serve, for those who protect, and for the ultimate sacrifice that they are asked to make on our behalf and for the families who support them, who enable them; because this was Christmas and many of us were never able to be with our families. We were out. On Christmas Day, I was out, and they were, working, working, working, and all they get is cuss, cuss, cuss. So can you tell them 'thanks' when you see them, and encourage them?"

Grant is the only candidate now in contention for the top job and, if confirmed in the post, would create history by becoming the first woman to command the 149-year-old organisation. The position was advertised in the press yesterday, "seeking to identify a suitably qualified candidate from within or outside" the JCF.

While it does not define the requisite qualifications, the advertisement makes the following demand of applicants.

"Specifically, the commissioner of police must have strong managerial experience and have responsibility for the overall command and superintendence of the Force and such powers and duties as are set out in the Constabulary Force Act, The Constables (District) Act, the Constables (Special) Act and the Police Service Regulations, 1961, and any amendments to these acts and regulations from time to time."

Persons applying for the job are invited to do so under confidential cover by Monday, January 23, outlining previous experience accompanied by a detailed curriculum vitae, which must be submitted electronically.