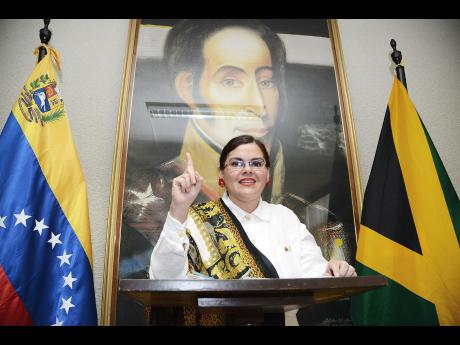 Ricardo Makyn
Charge d'Affaires of the Venezuelan Embassy, Luisa Gutierrez, addressing members of the media during a press conference held at the embassy yesterday.

Charge d'Affaires of the Venezuelan Embassy, Luis Gutierrez, said the Nicolas Maduro administration remains committed to bilateral agreements between the troubled South American nation and its Caribbean counterparts, including Jamaica.

Rocked by an ongoing economic and political crisis, Venezuela has seen its financial output slashed in half since the start of the year because of low price for oil on the world market.

More than 70 people have been killed in incidents linked to ongoing protests in that country since the opposition launched anti-government demonstrations at the start of April.

Quizzed as to whether Jamaica stands to lose the preferential pricing arrangement guaranteed under the PetroCaribe Agreement, and whether or not her government was pleased with Jamaica's stance in relation to the unfolding crisis in Venezuela, Gutierrez said she was not worried. She said that her government remained committed to the bilateral arrangements and trade between the two countries.

PetroCaribe is an agreement between Venezuela and several Caribbean territories to purchase oil on preferential payment conditions. The agreement, which began in 2005, allows beneficiary nations to buy oil at market value but only pay a percentage of the cost up front. The balance can be paid over 25 years at one per cent interest.

"I have been in contact with the authorities here, and we respect the position of the Government of Jamaica regarding the issues. We are called by our government to respect the various positions of all nations," Gutierrez said at a press conference at the Venezuelan Embassy yesterday.

Prime Minister Andrew Holness last year signalled Jamaica's intention to stand in solidarity with President Maduro, although at the time, the position taken raised questions about the safe operation of the Jamaican Embassy in Caracas.

"We have had a very close relationship with Jamaica and it became even closer when President Hugo Ch·vez visited in 1999. It was his first overseas trip as president, and we respect the solidarity of Jamaica in the sense of the comprehension of the complex situation that we are facing in Venezuela," Gutierrez said.

She noted that the troubling state of affairs in the oil-rich nation will take time to be resolved, and accused the country's main opposition party of pandering to outside influence in an effort to topple Maduro's presidency.

"Recent Venezuelan history shows that whenever the political opposition in that country feels it has support from the Organization of American States, they increase a practice of violence, destabilisation that seeks to delegitimise the power of the presidency," Gutierrez stated.

"We have seen internal issues that are never accepted in any other country, that insult the authority of the presidency," she added.

The European Union recently urged the Venezuelan government to set a clear calendar for elections, even though constitutionally mandated polls are not due until 2018, while regional elections are due in December 2017.