China praises Jamaica for signing on to Belt and Road Initiative 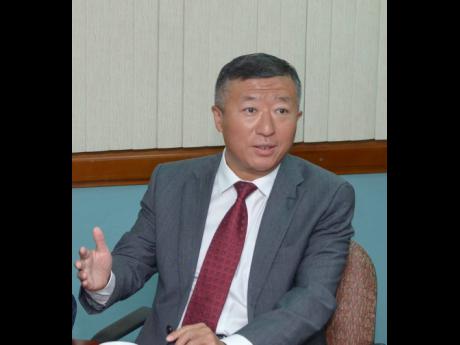 Chinese Ambassador Tian Qi has praised Jamaica’s decision to sign on to the mammoth Belt and Road Initiative (BRI), saying that it has opened a new era of mutual development and cooperation between the two nations.

His reaction came at the end of the second BRI Forum held in Beijing, China, last week under the theme ‘Belt and Road Cooperation: Shaping a Brighter Shared Future’. At the end of the forum, Chinese President Xi Jinping said US$64 billion worth of agreements had been signed.

Tian said Jamaica was right to join other countries and international organisations in positioning itself to reap rewards from the initiative.

“Looking into the future, I envisage high-quality Belt and Road cooperation in enhancing connectivity by promoting policy synergy, infrastructure development, unimpeded trade, financial cooperation and people-to-people bond, thereby enhancing practical cooperation for the well-being of our peoples,” the ambassador said.

He also noted that a range of infrastructure development projects, including the construction of the Edward Seaga Highway (formerly the North-South Highway), have been completed as a result of the cooperation. He said the country would continue reaping economic and developmental benefits from these projects.

Transport and Mining Minister Robert Montague, who led a Jamaican delegation to the forum, said that the Government stands ready to do what it takes to help in “fostering safe, seamless, intelligent, and efficient infrastructure connectivity” on the path to implementing the BRI.

Tian said that China is ready to join hands with Jamaica to build a more high-quality, reliable, resilient, and sustainable infrastructure.

“We emphasise that high-quality infrastructure should be viable, affordable, accessible, inclusive, and broadly beneficial over its entire life cycle, contributing to sustainable development of Jamaica. I am fully convinced that with high-quality infrastructure, Jamaica will make itself a significant player in the global and regional shipping and logistics industry and improve the ease of doing business in Jamaica as well as increase the country’s global competitiveness,” he said.

He also said that the flow of capital empowers economic growth and creates a broad space for it, adding that China has formulated the guiding principles on financing the development of the initiative by publishing the Debt Sustainability Framework for Participating Countries of the BRI to provide guidance for BRI financing cooperation.

As a result, Jamaica is being encouraged to continue to make good use of the Belt and Road Special Lending Scheme, the Silk Road Fund, and various special investment funds.

The initiative has funded trains, roads, and ports in many countries but has left some saddled with debt. Some recipient countries have also expressed concern over debt accumulation and increased Chinese influence.

Some observers see it as a bold bid for geopolitical influence, with the US particularly critical of China’s so-called “debt diplomacy”.