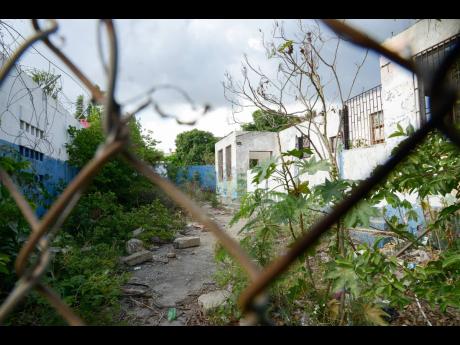 Shorn Hector
In this June 6, 2019, photograph, is seen a section of the burnt-out Hannah Town Police Station in west Kingston that was destroyed by firebombs during the May 2010 west Kingston upheaval. Residents are now demanding the restoration of the symbol of law and order.

Hannah Town residents are hoping that some of the funds set apart in the Ministry of National Security’s budget for fiscal year 2019-2020 will be used to reconstruct their burnt-out police station in a bid to rid the community of crime.

The station was destroyed by arsonist thugs as the security forces prepared to storm Tivoli Gardens in a bid to capture Christopher ‘Dudus’ Coke, who was wanted on a United States extradition warrant at the height of the May 2010 west Kingston incursion.

One policeman was shot and injured in the Hannah Town attack while one soldier and 69 civilians, many believed to be gunmen, were killed in the Tivoli Gardens firefight.

Today, only a shell full of junk serves as a reminder of its existence. A learning centre that was launched in February 2009 had 69 youth aged six to 18 enrolled in its programme at the time the station was destroyed.

“I can recall Bruce Golding saying at the time when he was in power that he had money to fix the station, so we want to know where that money is because we well need the station,” said Jean James, looking at the wrecked building.

Hannah Town and neighbouring communities are currently under a zone of special operations, a security crackdown that has been in force in west Kingston since October 2017. However, residents still complain about the impact of crime on their community amid the defunct police station.

“I honestly miss the station being here, especially that we have the likkle business here so. We want Hannah Town Police Station to be rebuilt because we hear that Government has given the green light for the repairing and upgrading of many other stations, but we not hearing anything about our station here,” said James, appealing to Prime Minister Andrew Holness and National Security Minister Horace Chang to meet with them.

“I believe that the police station is important for the community to help keep down crime. It would give us more police personnel to throw at violence in the area, and it would reassure the entire Hannah Town, as well as to offer certain service,” she added.

She said that if the police station was operational and fully staffed, it would also help to provide shelter for the security forces stationed a few yards from the former station in ZOSO.

One resident, a vendor in one of the downtown Kingston clothes markets who goes by the name ‘Lemmie’, told The Gleaner that before ZOSO, residents of Hannah Town found it increasingly difficult to feel safe even in their homes.

“The nearest station we have is at Denham Town. How that fi work when you have all kind of unlawful people a come and go through the community. That is why right now we are part of this ZOSO thing,” said Lemmie.

“I feel that if the station was there, it would lessen crime in the immediate areas at least. So please, Mr Prime Minister, bring back we station,” he pleaded.

Holness announced during his Budget presentation in March that 100 police stations are to be renovated at a cost of $2 billion under the Government’s two-year rehabilitation project being funded by the National Housing Trust. Work on the first 11 stations is slated to commence in the 2019-20 fiscal year, and would cost approximately $1.2 billion, he had stated.