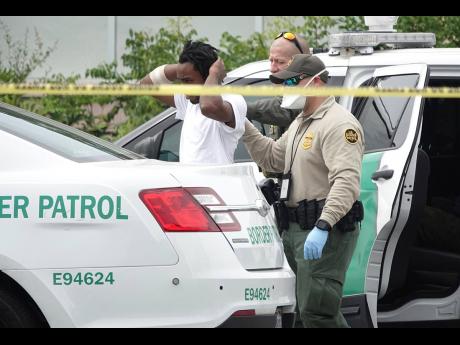 AP
United States Border Patrol officials detain one of 14 migrants who came ashore on the intracoastal waterway in Pompano Beach, Florida, on Thursday. Several of them are believed to be Jamaicans.

Well-placed Homeland Security sources have revealed that Border Patrol agents have intensified surveillance of travel routes between the Caribbean and the United States in a bid to stem the flow of illegals.

The disclosure comes amid the detention of 14 people, several of whom are believed to be Jamaicans, by US Border Patrol agents after they were headed off along the Florida coastline.

A young boy and two women are reportedly among those taken into custody.

A highly placed official told The Gleaner that the foray by the boaters represented an emerging pattern.

“This is being highlighted because it made the news, but there have been other incidents which have flown under the radar,” the official said.

Efforts to seek a comment from Deputy Commissioner of Police Fitz Bailey were unsuccessful as calls to his mobile phone rang without an answer.

The drama played out Thursday morning around 8:45 EDT (7:45 in Jamaica) when the boat almost ran aground in Pompana Beach in the Broward County area.

According to reports, the boat carrying the migrants arrived on shore near the 2800 block of Atlantic Boulevard, near 28th Avenue on the inter-coastal waterway, and deputies were called to the area.

Broward Sheriff media relations officer Claudinne Caro, in a statement, said that the migrants were detained and later handed over to Border Patrol agents who also arrived on the scene.

One eyewitness told a local television station that some of the people on the boat tried to flee but were rounded up by deputies.

Television footage showed those detained sitting on the ground in handcuffs.

Caro said that she did not have information on the nationality of the people detained, nor could she give the name of the boat.

The spokeswoman referred The Gleaner to Homeland Security, which also did not provide any information.

However, a report in the Miami Herald newspaper quoted one man as saying that they were from Jamaica and were fleeing gun violence and were in search of a better quality of life.

“There’s killing going on there. We want a better life. No life in Jamaica right now,” the newspaper quoted the man as saying.

However, a report in the Sun Sentinel newspaper said that the migrants refused to disclose their port of departure.

The newspaper reported that the migrants were from Jamaica, Haiti, and the Dominican Republic.

Officials have discounted that those detained were being trafficked.

It is strongly suspected in law-enforcement circles that the migrants paid to be brought to the United States.

The investigation is continuing and officials of the Jamaican consulate in Miami are monitoring the situation to determine if the migrants are Jamaicans.