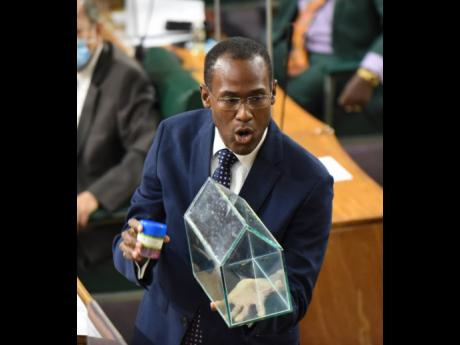 The Holness administration has inched ahead in national Budget transparency, improving its score of 42 from three years ago to 50. However, Jamaica continues to lag behind high-income countries.

The result of the latest Open Budget Survey (OBS), which placed the country above the global average, was published by the Caribbean Policy Research Institute (CAPRI) in its Follow the Money report launched Thursday evening.

Still, Jamaica ranks among 94 of 120 countries assessed by OBS in 2021 that failed to reach the minimum threshold of 60 for adequate Budget transparency, public participation, and oversight, the report said.

The OBS is the world’s only independent, comparative, and objective research instrument for assessing countries.

“While above the global average, Jamaica’s score is well below those in the Organization for Economic Cooperation and Development (OECD), a group of 38 mostly high-income developed countries, which can serve as a benchmark that Jamaica should seek to emulate.

“By the standard established by those countries, in order to be considered sufficiently transparent in fiscal matters, Jamaica still has room for improvement,” the report noted.

In measuring the Government’s transparency in the Budget process, the survey considered the public availability of documents that show how public resources are raised and spent and the comprehensiveness of the information presented.

The report said that of the eight key Budget documents relevant to Jamaica, seven were published in a timely manner on the Ministry of Finance’s website. All seven are accessible at no cost.

It said that the exception is the pre-Budget statement, which presents the finance ministry’s economic and fiscal policy plan for the forthcoming budget year.

It said that the increase in transparency score was achieved by publishing the two supporting documents of the executive’s Budget proposal in a timely manner.

“The executive Budget proposal and in-year report were both deemed “sufficient”, scoring 61 and 63, respectively. There is, however, room for improvement as Jamaica still does not produce a pre-Budget statement, the only document not publicly available,” it said.

In terms of participation, the report said opportunities for public participation in the Budget are limited, with only a few mechanisms in place that allow citizens to participate in the monitoring and evaluation of the Government’s actions.

It said avenues to participate ought to be provided by the executive through the finance ministry.

Additionally, the report cited Parliament’s poor performance in its oversight of the Budget.

It said that the Public Administration and Appropriations Committee, the parliamentary subcommittee with oversight responsibility, is required to examine in-year reports and publish a report with the findings at least three times during the budget year.

This was done fewer than three times via social media for the year.

“This is considered inadequate and does not meet the minimum requirement for effective oversight,” the report said.