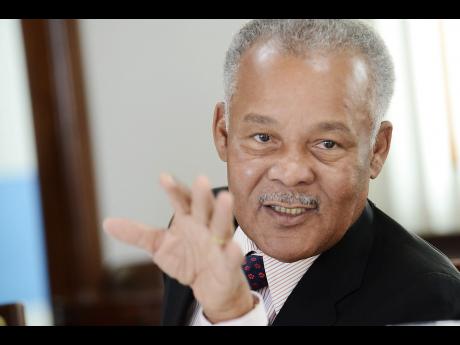 Describing as disastrous the decision of Caribbean leaders to accept a liquidity programme for growth sustainability facility from the powerful G20 in 2010, former Barbados prime minister, Owen Arthur, says that the region has been unable to draw down on the funds because the purposes for which it was created do not exist.

"The Caribbean allowed the global community to imagine that we had the same kind of problem with the financial sector as was in the [United] States. The money pledged to the Caribbean was put into a programme, which you had to unfreeze, and government could only access to unlend to unfreeze the financial sector," said Arthur, who was a guest at a recent Gleaner's Forum.

G20 countries in 2010 promised to assist the Caribbean region to mitigate the effects of the financial recession of 2008. The G20 is a forum for the governments and central bank governors from 20 major economies. Its membership includes Australia, Brazil, Canada, China, France, Germany, India, Italy, Japan, Russia, Saudi Arabia, South Africa, Turkey, the United Kingdom, the United States, and the European Union.

According to Arthur, the Caribbean did not have a problem with the financial sector, thus the facility was no good.

"The help that the region should have got from the global community in response to the crisis did not materialise because they put money in a place to solve a crisis that did not exist," he said.

The Caribbean region has been clamouring for the G20 to make good on the promised assistance. Earlier this year, Jamaica's Finance Minister Dr Peter Phillips said at a G20 meeting in Washington that the Caribbean continued to feel the impact of the global economic crisis, which is impeding its capacity to grow.

Phillips noted that the Caribbean was still suffering the effects of the crisis of 2008-09, pointing out that the consequences of the crisis are impeding the region's capacity to grow, particularly because of the high debt.

"We continue to suffer because the expectations that were generated in 2008, coming out of the first meeting of the G20 nations, for resources to alleviate the plight of the region that was hardest hit by the crisis have been unfulfilled," Phillips said in 2014.

Phillips said there was urgent need for the G20 to fulfil its promise, citing the region's high debt burden, climatic vulnerabilities, along with energy insecurities.

The Liquidity Programme for Growth Sustainability was established in October 2008 with the purpose of maintaining the flow of credit to the real economy, offsetting in part, and on a temporary basis, shortfalls in normal credit flows to the region resulting from the global financial crisis.

Arthur said that the Caribbean region is of little geo-political importance to the developed world and that countries of the region must reinvent themselves to become relevant.

"A huge part of the problem in the Caribbean is its geo-political marginalisation. Our traditional partners have walked away from any sense of obligation towards Caribbean development and relate to us only in relation to things like security problems originating in our countries that can affect them," Arthur said.

"The world has stopped taking us seriously, and were it not for China and Venezuela, most Caribbean economies would have gone under... . The Caribbean has to find a way of reinventing itself as an entity to be taken seriously," he added.