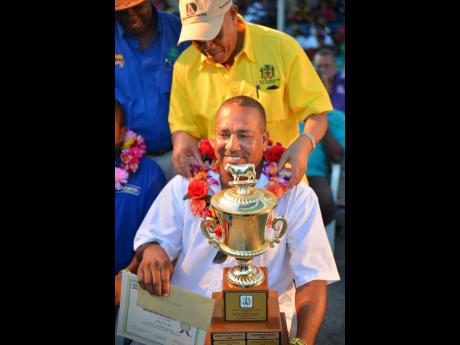 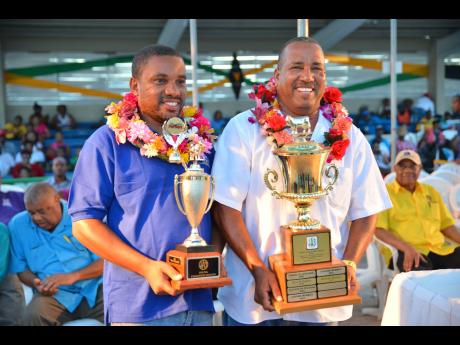 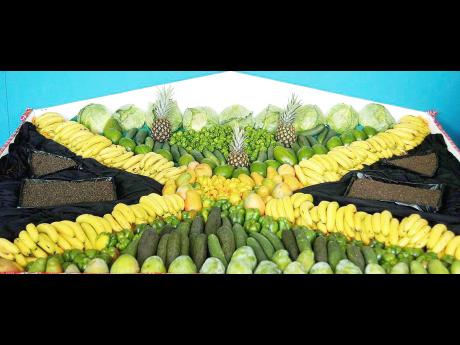 File
One of the creative displays of fruits and vegetables at the Denbigh Agricultural and Industrial Show in 2014.
1
2
3

As crop and livestock production and productivity across the country continue to be negatively affected by a prolonged drought, two of the farmers who took top honours at the 2014 staging of the annual Denbigh Agricultural, Industrial and Food Show are confident going into this year's show, set for July 31 to August 2.

Champion Farmer Richard Bennett, who also took the award for Most Innovative Farmer, and Young Champion Farmer Sheldon Williams, who was also the second-place champion pig farmer, have expanded their operations since. Both men identified an investment in state-of-the-art technology as a major factor in their farming success, declaring that the drought has not been allowed to affect their operations.

Despite his good fortune, the veteran farmer does not take things for granted and has invested significantly in rainwater harvesting equipment as well as a water-treatment plant.

"I have a 120,000 gallon water tank underground and the houses are guttered, so whenever rain falls, no matter how long, I collect water, and I have a state-of-the-art, automated water-treatment plant. I treat my water for the poultry and pigs and use the collected water for irrigation. So with the drought, yes it's a challenge, but I collect enough water. Even yesterday, my tank overflowed," the St Catherine farmer said.

In addition to harvesting rainwater, of which the plant is capable of treating 16,000 gallons a day, Bennett has also invested in a small truck, which is used to collect water from a river, as well as springs in the area.

He has since ventured into rabbit rearing, as well as honey production; added five more staple crops to the nine he cultivated last year; and tripled the pig population to 300. This is in addition to the approximately 157,000 chickens he grows under contract for supply to Caribbean Broilers and 16 goats for personal use.

Bennett's 22-acre farm is ISO 9001:2008, HACCP (hazard analysis and critical control points) and GMP (good manufacturing practice) certified through Switzerland-based SociÈtÈ GÈnÈrale de Surveillance (SGS). The general procedure for farmers to become certified by SGS includes an audit of their operations by HACCP, followed by the extensive training of

Farmers must also implement a preventative maintenance plan for the equipment being used; undergo an audit of their operations - documentation of policies as they relate to traceability of the products and a plan to upgrade all farm infrastructure to be compliant with HACCP procedures.

It is no wonder then that Bennett's response was a prompt "good" when asked about the chances of retaining the National Champion Farmer title.

Meanwhile, for Williams of Seaford Town, Westmoreland, who left his job as a bank teller seven years ago to go into pig farming, starting with one sow, the gamble has really paid off. Equipped with a bachelor's degree in geography from the University of the West Indies, he was doing well but just wasn't satisfied.

nothing goes to waste

Today, that business has grown to include 1,000 pigs, pineapples, plantains, and coconuts on a large scale, and on coping with the drought, "Me did prepare," was the 34-year-old farmer's response.

Between 2009 and 2012, water shortages were a serious problem, but since then, Williams has invested in a number of ponds and tanks on the farm, guaranteeing storage of millions of gallons of water. "It's no longer a biggie," he declared.

The Westmoreland farmer has also invested in a wastewater treatment facility that incorporates a bio-digester that captures the manure. This is then used to produce methane gas, which is used to cook, as well as an energy source to power the generator to meet on-farm electricity demands. The manure is also converted into organic fertiliser.

"So nothing goes to waste," Williams shared, explaining that the facility is approved and licensed by the National Environment and Planning Agency.

Since last year, the Champion Young Farmer has put in another 10 acres of pineapple, bringing to 30 the total acreage under production. However, it is the secured market for pork, based on a long-term contract with Copperwood Farms, that has really paid off for Williams.

Some 18 months after starting out, the struggling pig farmer got on to the Nutramix feeding programme, where, in addition to feed, his suppliers also provided expert advice and helped in improving the genetic stock of the animals he was breeding.

Thereafter, Williams was offered a contract to supply pork to Copperwood, which is also a member of the Caribbean Broilers Group, an arrangement under which his business continues to flourish.

So going forward to Denbigh 2015, "It's all up to judges, but I feel I have very good chance of winning again," he shared with The Gleaner.

And don't tell Richard Bennett, but the Champion Young Farmer also has his eye on the National Champion Farmer trophy.