In the world of the Malongo tradition- Part II 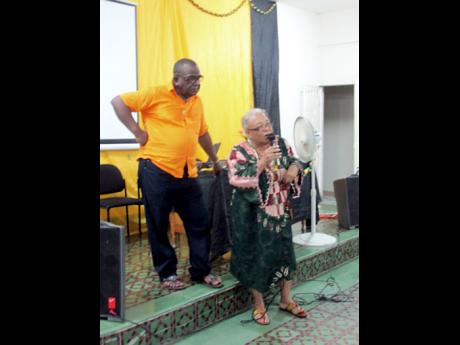 The Malongo tradition is a Congolese religion in which there is a belief in one supreme God, even though there are many other nature deities. There is also a great reverence for nature. And according to Cuban Malongo priest, AndrÈs RamÌrez MachÌn (Tata NKisy), we live with, by and for nature, the environment being very important to us.

He said everything in the environment has life and is moved by energy. This was the belief he said of his African ancestors who identified that energy as the spirit of life. "We are convinced by proof that nature is a most important thing that we have to keep with us, and we were born to deal with nature and grow with nature, not destroy it," Tata NKisy said.

The tradition was brought to Cuba by enslaved Africans and it has survived in many forms. Tata NKisy and his wife, Elena Diaz (Yaye Nganga), are in Jamaica, and Family and Religion has been talking with them about the beliefs and philosophies of the Malongo tradition, of which he has been a priest for more than 30 years.

Malongo, he said, means "spirit that has come back to life", because, he said, we have never died. As such, he said he doesn't like the term 'pass away'. "We never pass away; we are here all the time. We only changed position," he argued. There is life beyond life, so to speak. Thus, there is a central belief in the spiritual.

Our existence, he said, is divided into two angles set in the shape of the cross. One is the spiritual, and the other is the physical. One cannot exist without the other as there is no material without the spirit. The material needs life breath, and that is given by the spirit, and the spirit needs material to manifest he said. The physical then is the medium in which the spirit exists.

And just as the spiritual lives within the physical, he said we are one with the Creator, who is singular in his capacity as organiser of the universe. We are his creation and thus we are part of him. "What would have been the Creator without the creation?" Tata NKisy asked.

"In the divine plan he creates us to develop himself and to give us the chance to develop ourselves," he said, "At the end, everyone of us has to be a creator in some way. We are creators. We are creating all the time in the Congolese tradition."